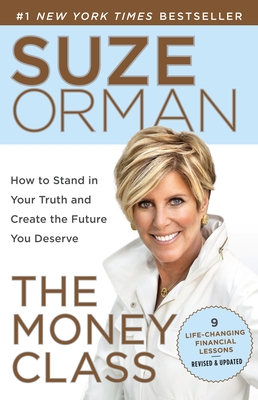 WHAT WILL YOU LEARN IN THE MONEY CLASS?

How to find the courage to stand in your truth and why it is a place of power.

What daily actions will restore the word “hope” to your vocabulary.

Everything you need to know about taking care of your family, your home, your career, and planning for retirement—no matter where you are in your life or where the economy is heading.

In nine electrifying, empowering classes, Suze Orman teaches us how to navigate these unprecedented financial times. With her trademark directness, she shows us how to tackle the complicated mix of money and family, how to avoid making costly mistakes in real estate, and how to get traction in your career or rebuild after a professional setback. And in what is the most comprehensive retirement resource available today, Suze presents an attainable strategy, for every reader, at every age.

In The Money Class you will learn what you need to know in order to feel hopeful, once again, about your future.

Suze Orman is a two-time Emmy Award–winning television host, #1 New York Times bestselling author, magazine and online columnist, writer/producer, and one of the top motivational speakers in the world today.

Orman has written eight consecutive New York Times bestsellers and has written, co-produced, and hosted seven PBS specials based on her books. She is the seven-time Gracie Award–winning host of the Suze Orman Show, which airs on CNBC, and of the forthcoming Money Class on OWN: The Oprah Winfrey Network. She is also a contributing editor to O: The Oprah Magazine.

Twice named one of the “Time 100,” Time magazine’s list of the world’s most influential people, and named by Forbes as one of the 100 most powerful women, Orman was the recipient of the National Equality Award from the Human Rights Campaign. In 2009 she received an honorary doctor of humane letters degree from the University of Illinois at Urbana-Champaign and in 2010 she received an honorary doctor of commercial science from Bentley University.

Orman, a Certified Financial Planner™ professional, directed the Suze Orman Financial Group from 1987 to 1997, served as Vice President—Investments for Prudential Bache Securities from 1983 to 1987, and was an account executive at Merrill Lynch from 1980 to 1983. Prior to that, she worked as a waitress at the Buttercup Bakery in Berkeley, California, from 1973 to 1980.

Praise For The Money Class: How to Stand in Your Truth and Create the Future You Deserve…

“Suze teaches readers how to transform their thinking and reimagine the American dream.”—O: The Oprah Magazine
or support indie stores by buying on
(This book is on backorder)
Copyright © 2020 American Booksellers Association