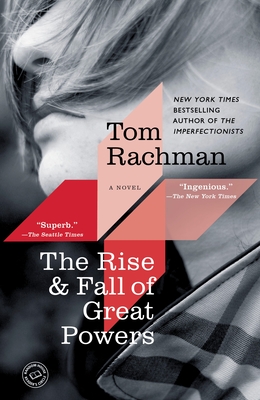 From the author of The Italian Teacher and The Imperfectionists comes a brilliant, intricately woven novel about a young woman who travels the world to make sense of her puzzling past.

Look in the back of the book for a conversation between Tom Rachman and J. R. Moehringer

Following one of the most critically acclaimed fiction debuts in years, New York Times bestselling author Tom Rachman returns with a brilliant, intricately woven novel about a young woman who travels the world to make sense of her puzzling past.

Tooly Zylberberg, the American owner of an isolated bookshop in the Welsh countryside, conducts a life full of reading, but with few human beings. Books are safer than people, who might ask awkward questions about her life. She prefers never to mention the strange events of her youth, which mystify and worry her still.

Taken from home as a girl, Tooly found herself spirited away by a group of seductive outsiders, implicated in capers from Asia to Europe to the United States. But who were her abductors? Why did they take her? What did they really want? There was Humphrey, the curmudgeonly Russian with a passion for reading; there was the charming but tempestuous Sarah, who sowed chaos in her wake; and there was Venn, the charismatic leader whose worldview transformed Tooly forever. Until, quite suddenly, he disappeared.

Years later, Tooly believes she will never understand the true story of her own life. Then startling news arrives from a long-lost boyfriend in New York, raising old mysteries and propelling her on a quest around the world in search of answers.

Tom Rachman—an author celebrated for humanity, humor, and wonderful characters—has produced a stunning novel that reveals the tale not just of one woman but of the past quarter-century as well, from the end of the Cold War to the dominance of American empire to the digital revolution of today. Leaping between decades, and from Bangkok to Brooklyn, this is a breathtaking novel about long-buried secrets and how we must choose to make our own place in the world. It will confirm Rachman’s reputation as one of the most exciting young writers we have.

Praise for The Rise & Fall of Great Powers

“Ingenious . . . Rachman needs only a few well-drawn characters to fill a large canvas and an impressive swath of history.”—Janet Maslin, The New York Times

Praise For The Rise & Fall of Great Powers: A Novel…

“Ingenious . . . [Tom] Rachman needs only a few well-drawn characters to fill a large canvas and an impressive swath of history.”—Janet Maslin, The New York Times

“Rachman’s comedic powers drive the story, with grace and wit. . . . [He] can compose sentences, paragraphs and whole pages with near perfect pitch and rhythm.”—Minneapolis Star Tribune

“Living on the edge has its pitfalls—and charms—in British author Tom Rachman’s cracking new novel. . . . We are treated to Rachman’s rich gift not only for bringing his book’s personae completely to life but for doing so with great wit and a penchant for Dickensian names. . . . But if the novel starts with the feel of Oliver Twist . . . it morphs into a sort of Great Expectations—and we buy every wonderful word of it.”—The Buffalo News

“If you’re in the market for an accomplished and satisfying novel, one that will take hold of you immediately from page one and set you down gently at the end feeling uplifted and rewarded, you could just stop reading at the end of this paragraph and wander over to your favourite bookstore and buy a copy of Tom Rachman’s exquisite new book, The Rise & Fall of Great Powers. . . . This is what fiction is all about. It is impossible to overstate its power and elegance.”—The Globe and Mail

“For a novel that takes place on three different continents over a period of thirty years, Tom Rachman’s The Rise & Fall of Great Powers is a surprisingly small story. That’s probably what makes it so good: Even with all the flights of fancy and exotic locales, the characters in it are beautifully human, even if half of them are con artists with Dickensian names. After his much acclaimed 2010 debut, The Imperfectionists, Rachman uses this follow-up to prove he’s a writer to watch. [Grade:] A”—The A.V. Club

“Rachman clearly has Dickens in mind as inspiration for this sprawling tale of an orphan cast out onto the world and belatedly investigating the mystery of her origins. . . . Its pleasures are almost architectural. . . . You may come to admire, as I did, the precision of its observations, as well as its intricate form and the way stray plot pieces eventually snap into place.”—Maureen Corrigan, NPR

“This book is mesmerising: a thorough work-out for the head and heart that targets cognitive muscles you never knew you had. Thanks, though, to Rachman’s lightness of touch and quite considerable streaks of silliness, it feels much more like dancing than exercise.”—The Times (UK)

“Some novels are such good company that you don’t want them to end; Tom Rachman knows this, and has pulled off the feat of writing one. . . . Rachman has written a hugely likeable, even loveable book about the people we meet and how they shape us.”—The Telegraph (UK)

“The observations raised in this novel emerge from the very specific tale of one woman and her extremely unusual circumstances, but what they all point to is a kind of reckoning with the most fundamental questions of human existence: who we are, and why. . . . While Rachman's novel offers no easy answers—indeed, how could it?—it provides a worthwhile investigation into our insatiable need for self-knowledge, a desire that is profoundly and inescapably part of what it means to be human.”—Chicago Tribune

“Tom Rachman’s second novel is a great jigsaw-puzzle of a book, spanning a quarter of a century and with its pieces scattered all over the world. . . . It’s in something of that spirit that, as the book moves towards its end, the strange gravities that hold its constellation of characters together start to make sense—upsetting both Tooly’s and the reader’s expectations in a satisfying and rather poignant way.”—The Guardian (UK)

“Tom Rachman scores again . . . [Tooly] is plucky and admirable and so fully drawn that you watch with horror as she makes terrible and cruel choices through her young adulthood. . . . We watch with admiration as Tooly’s heart opens up and she does her best to correct and amend for her past behaviors. . . . This is a satisfying adult novel with a hopeful ending.”—The Oregonian

“Tremendously readable, with characters who often spark and jump off the page, and a central puzzle that grips you until the end.”—The Huffington Post

“When a Tom Rachman novel lands in the bookstores, I stop living and breathing to devour it. It’s hard to think of anyone who has a better grasp on the world we live in (and I mean, like, the entire planet) and can write about it with such entertainment and panache.”—Gary Shteyngart, author of Little Failure

“Rachman’s kaleidoscopic second novel demonstrates that one’s family is very often made up of the people you find and who find you along the way.”—Booklist

“A tale about the mystery of the self, the power of books, and how truth and fiction can inextricably intermingle . . . captivating.”—Library Journal

Tom Rachman was born in London in 1974 and raised in Vancouver. He attended the University of Toronto and Columbia Journalism School, then worked as a journalist for the Associated Press in New York and Rome and for the International Herald Tribune in Paris. His first novel, The Imperfectionists, was an international bestseller, translated into twenty-five languages. He lives in London.
Loading...
or
Not Currently Available for Direct Purchase