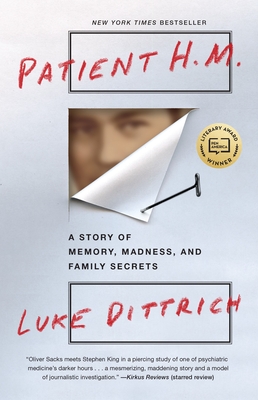 A Story of Memory, Madness, and Family Secrets

“Oliver Sacks meets Stephen King”* in this propulsive, haunting journey into the life of the most studied human research subject of all time, the amnesic known as Patient H.M. For readers of The Immortal Life of Henrietta Lacks comes a story that has much to teach us about our relentless pursuit of knowledge.

In 1953, a twenty-seven-year-old factory worker named Henry Molaison—who suffered from severe epilepsy—received a radical new version of the then-common lobotomy, targeting the most mysterious structures in the brain. The operation failed to eliminate Henry’s seizures, but it did have an unintended effect: Henry was left profoundly amnesic, unable to create long-term memories. Over the next sixty years, Patient H.M., as Henry was known, became the most studied individual in the history of neuroscience, a human guinea pig who would teach us much of what we know about memory today.

Patient H.M. is, at times, a deeply personal journey. Dittrich’s grandfather was the brilliant, morally complex surgeon who operated on Molaison—and thousands of other patients. The author’s investigation into the dark roots of modern memory science ultimately forces him to confront unsettling secrets in his own family history, and to reveal the tragedy that fueled his grandfather’s relentless experimentation—experimentation that would revolutionize our understanding of ourselves.

Dittrich uses the case of Patient H.M. as a starting point for a kaleidoscopic journey, one that moves from the first recorded brain surgeries in ancient Egypt to the cutting-edge laboratories of MIT. He takes readers inside the old asylums and operating theaters where psychosurgeons, as they called themselves, conducted their human experiments, and behind the scenes of a bitter custody battle over the ownership of the most important brain in the world.

Patient H.M. combines the best of biography, memoir, and science journalism to create a haunting, endlessly fascinating story, one that reveals the wondrous and devastating things that can happen when hubris, ambition, and human imperfection collide.

Praise For Patient H.M.: A Story of Memory, Madness, and Family Secrets…

“In prose both elegant and intimate, and often thrilling, Patient H.M. is an important book about the wages not of sin but of science. It is deeply reported and surprisingly emotional, at times poignant, at others shocking. . . . A scintillating book, infused with humanity.”—The Washington Post

“Spellbinding . . . The fact that Dittrich looks critically at the actual process of scientific investigation is just one of the things to admire about Patient H.M.”—The New York Times Book Review

“Astonishingly insightful . . . A fascinating story in its own right to anyone interested in the history of modern science’s attempts to understand the causes of mental illness along with the many botched attempts to treat it . . . [Patient H.M.] is indeed about memory, madness, and family secrets and, in that sense, about the paths that shape the core of the self, in each and every one of us.”—Psychology Today

“Beautifully told . . . a book that will rank with Rebecca Skloot’s The Immortal Life of Henrietta Lacks in the realm of outstanding medical ethics narratives.”—Associated Press

“Dittrich’s account raises entirely new questions about the way in which the research on H.M. was conducted—and about the conclusions that have long been incorporated into our understanding of memory.”—New York Magazine

“Oliver Sacks meets Stephen King in a piercing study of one of psychiatric medicine’s darker hours. . . . A mesmerizing, maddening story and a model of journalistic investigation.”—Kirkus Reviews (starred review)

“At the heart of this breathtaking work . . . is [Luke] Dittrich’s story of his complicated grandfather, his mentally ill grandmother, and a long-held family secret, with Molaison stranded ‘where the past and the future were nothing but indistinct blurs.’”—Publisher’s Weekly (starred review)

“The machinations of scientists and researchers—their personality and ambition, power and hubris—are of equally vital (and cautionary) importance in Dittrich’s unusual and compelling mix of science and family history.”—Booklist (starred review)

“Patient H.M. tells one of the most fascinating and disturbing stories in the annals of medicine, weaving in ethics, philosophy, a personal saga, the history of neurosurgery, the mysteries of human memory, and an exploration of human ego. A monumental contribution to our understanding of medical research, and of ourselves, Patient H.M. is sweeping, meticulous, and seamless—with an ending that, like the best of scientific investigations, challenges everything that came before it.”—Sheri Fink, M.D., Pulitzer Prize winner and author of Five Days at Memorial

Luke Dittrich is a National Magazine Award–winning journalist, and a contributing editor at Esquire. This is his first book.
Loading...
or support indie stores by buying on