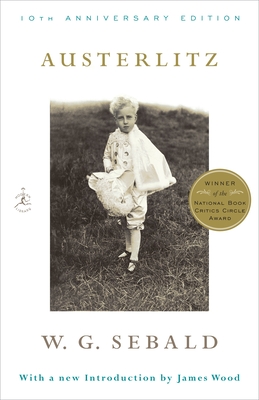 This tenth anniversary edition of W. G. Sebald’s celebrated masterpiece includes a new Introduction by acclaimed critic James Wood. Austerlitz is the story of a man’s search for the answer to his life’s central riddle. A small child when he comes to England on a Kindertransport in the summer of 1939, Jacques Austerlitz is told nothing of his real family by the Welsh Methodist minister and his wife who raise him. When he is a much older man, fleeting memories return to him, and obeying an instinct he only dimly understands, Austerlitz follows their trail back to the world he left behind a half century before. There, faced with the void at the heart of twentieth-century Europe, he struggles to rescue his heritage from oblivion.

“[A] beautiful novel . . . quietly breathtaking . . . Sebald contrives not to offer an ordinary, straightforward recital. For what is so delicate is how Sebald makes Austerlitz’s story a broken, recessed enigma whose meaning the reader must impossibly rescue.”—James Wood, from the Introduction

“Sebald stands with Primo Levi as the prime speaker of the Holocaust and, with him, the prime contradiction of Adorno’s dictum that after it, there can be no art.”—Richard Eder, The New York Times Book Review

“Sebald is a rare and elusive species . . . but still, he is an easy read, just as Kafka is. . . . He is an addiction, and once buttonholed by his books, you have neither the wish nor the will to tear yourself away.”—Anthony Lane, The New Yorker

“Sebald’s final novel; his masterpiece, and one of the supreme works of art of our time.”—John Banville, The Guardian

W.G. Sebald was born in Wertach im Allgau, Germany, in 1944. He studied German language and literature in Freiburg, Switzerland, and Manchester. He has taught at the University of East Anglia in Norwich, England, since 1970, becoming professor of European literature in 1987, and from 1989 to 194 was the first director of the British Center for Literary Translation. His three previous books have won a number of international awards, including the Los Angeles Times Book Award for fiction, the Berlin Literature Prize, and the Literatur Nord Prize.
Loading...
or support indie stores by buying on