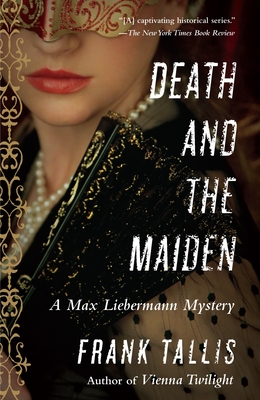 Death and the Maiden

Ida Rosenkranz is top diva at the Vienna Opera, but she’s gone silent for good after an apparent laudanum overdose. Learning of her professional rivalries and her scandalous affairs with older men, Detective Inspector Oskar Rheinhardt and Dr. Max Liebermann suspect foul play instead. Their investigation leads them into dark and dangerous conflicts with Gustav Mahler, the opera’s imperious director, who is himself the target of a poison pen campaign, and Karl Lueger, Vienna’s powerful and anti-Semitic mayor. As the peril escalates, Rheinhardt grows further into his role as family man, while Liebermann finds himself at odds with his inamorata, Amelia, who’s loosening both her corset and her tongue in the new feminist movement.

Praise For Death and the Maiden: A Max Liebermann Mystery…

"As in his previous series entries, Edgar-nominated writer and practicing clinical psychologist Tallis masterfully evokes period and place. Among the many pleasures here is the presence of real-life characters from the era, including moody composer and conductor Gustav Mahler and controversial psychiatrist Sigmund Freud."

Frank Tallis is a writer and clinical psychologist. He has written self-help manuals, non-fiction for the general reader, academic textbooks, more than thirty academic papers in international journals, and seven previous novels. Between 1999 and 2011 he received or was shortlisted for numerous awards, including the New London Writers Award, the CWA Ellis Peters Historical Dagger, the prix des letrices de Elle, and an Edgar. His critically acclaimed Liebermann series has been translated into fourteen languages and optioned for television.
Loading...
or
Not Currently Available for Direct Purchase