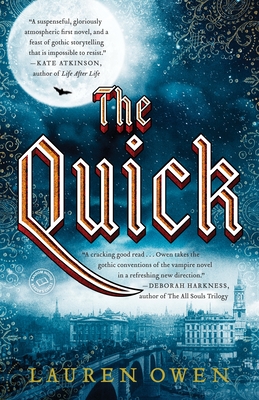 For fans of Anne Rice, The Historian, and The Night Circus, an astonishing debut, a novel of epic scope and suspense that conjures up all the magic and menace of Victorian London

1892: James Norbury, a shy would-be poet newly down from Oxford, finds lodging with a charming young aristocrat. Through this new friendship, he is introduced to the drawing-rooms of high society and finds love in an unexpected quarter. Then, suddenly, he vanishes without a trace. Alarmed, his sister, Charlotte, sets out from their crumbling country estate determined to find him. In the sinister, labyrinthine London that greets her, she uncovers a hidden, supernatural city populated by unforgettable characters: a female rope walker turned vigilante, a street urchin with a deadly secret, and the chilling “Doctor Knife.” But the answer to her brother’s disappearance ultimately lies within the doors of the exclusive, secretive Aegolius Club, whose predatory members include the most ambitious, and most bloodthirsty, men in England.

In her first novel, Lauren Owen has created a fantastical world that is both beguiling and terrifying. The Quick will establish her as one of fiction’s most dazzling talents.

“A suspenseful, gloriously atmospheric first novel, and a feast of gothic storytelling that is impossible to resist.”—Kate Atkinson

“The Quick is that rare book that reviewers and readers live for: both plot- and character-driven, a stay-up-all-night reading romp. . . . This is elegant, witty, force-of-nature writing.”—The Dallas Morning News

“A seamless blend of Victorian London and rich imagination.”—Tana French, author of In the Woods

“A thrilling tale . . . This book will give you chills even on a hot day.”—Minneapolis Star Tribune

“Stylishly sinister . . . will have you sleeping with the lights on.”—O: The Oprah Magazine

“A sly and glittering addition to the literature of the macabre.”—Hilary Mantel, author of Wolf Hall

“A big, sly bucketful of the most tremendous fun . . . [Owen] weaves what’s here with what’s beyond as easily as J. K. Rowling does.”—Slate

Praise For The Quick: A Novel…

“Reading the blurbs on the dust jacket of Lauren Owen’s first novel—from such luminaries as Kate Atkinson, Hilary Mantel, and Tana French—readers might think they’re about to embark on a high-handed version of the Gothic novel, full of metafictions and literary allusions. These do appear, along with some beautiful language, but by Page 100, when the first neck is about to be bitten, The Quick drops its cloak and becomes a good old-fashioned vampire novel. . . . [It’s full of] wonderful inventions, while still providing the torn collars and hungry looks the genre demands. . . . What fun.”—The New York Times Book Review (Editor’s Choice)

“The Quick is that rare book that reviewers and readers live for: both plot- and character-driven, a stay-up-all-night-reading romp of more than 500 pages that you’ll desperately wish was double that. This is elegant, witty, force-of-nature writing, and Lauren Owen should have a long and illustrious career ahead of her.”—The Dallas Morning News

“[A] creepy debut . . . a thrilling tale . . . This book will give you chills even on a hot day.”—Minneapolis Star Tribune

“Forget Jack the Ripper—it’s the curiously pale aristocratic types you need to beware of in this supernatural Gothic nightmare. . . . Owen’s stylishly sinister world of betrayal and Lovecraftian monsters will have you sleeping with the lights on.”—O: The Oprah Magazine

“A big, sly bucketful of the most tremendous fun . . . At first, The Quick seems like a really terrific, plain old tale of yesteryear—à la John Banville or Peter Carey or Eleanor Catton. . . . [But then] things begin to really rollick. . . . [Owen] weaves what’s here with what’s beyond as easily as J.K. Rowling does, and as with Rowling, she seems to feel particularly at home with the beyond.”—Slate

“The Quick is ambitious in both scope and structure. . . . Her London is exquisitely detailed. . . . [Owen] inhabits the breadth and panorama of the Victorian tale.”—The Washington Post

“The first quarter of this debut novel is a lovely, poetic tale. . . . The last half is entirely bonkers and totally unexpected. Read it with the lights on.”—The New Republic

“Make no mistake, The Quick is good reading. . . . Adventure of the first order, firmly rooted in both the tropes of the genre and the skilfully rendered texture of the period . . . driven by sharp storytelling, thought-provoking ideas, and strong characters.”—The Globe and Mail

“Like the best gothic fiction, this dark tale of manners and morals closely guards its secrets; over hundreds of pages, one unspoken word lurks in the corners of every character’s and reader’s mind. By the end of Owen’s precocious first novel, set in the narrow streets and cavernous interiors of Victorian England, you will understand viscerally how monsters are made and what it means to be human.”—More magazine

“Lauren Owen is an impressive storyteller and with this ambitious debut, the literary world will soon take notice. Part gothic mystery, part Victorian romance, The Quick is a novel where the glamorous and the macabre collide. . . . With suspenseful rhythm and illustrious prose, Owen succeeds at crafting a fresh, enchanting portrait of Victorian London wrapped around an irresistible mystery that is at once beautiful and terrifying.”—Bustle

“[The Quick] hits the mark in terms of suspense and gothic literature. . . . Reminiscent of Bram Stoker’s Dracula and [Elizabeth] Kostova’s The Historian.”—The Times-News

“If you are a fan of literary Gothic—think Susanna Clarke or John Harwood—buy this book. You won’t regret it. . . . A long gallery of beautifully drawn characters makes the many pages of The Quick turn as swiftly as those of a Wilkie Collins novel.”—BookPage

“Owen has created an intricate world in which the reader feels a part. Take the trip, if you dare, into a luscious Victorian London rendered by a gifted young British writer who seems weaned on equal parts Sherlock Holmes, Buffy Summers and Harry Potter.”—Shelf Awareness

“An intricate, sinister epic . . . an impressive feat . . . Owen proves a master at anticipating readers’ thoughts about future happenings and then crumbling them into dust. Her world building is exceptional, and readers will simultaneously embrace and shrink from the atmosphere’s elegant ghastliness.”—Booklist

Lauren Owen was born in 1985. She studied at Oxford University and the University of East Anglia, where she received the 2009 Curtis Brown Prize for the best fiction dissertation. The Quick is her first novel. She lives in Northern England.
Loading...
or support indie stores by buying on
(This book is on backorder)