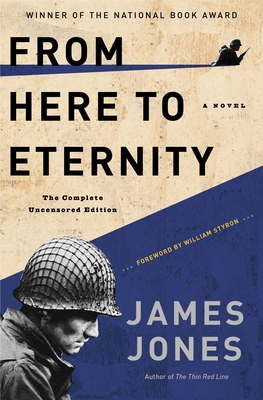 From Here to Eternity (Paperback)

Diamond Head, Hawaii, 1941. Pvt. Robert E. Lee Prewitt is a champion welterweight and a fine bugler. But when he refuses to join the company’s boxing team, he gets “the treatment” that may break him or kill him. First Sgt. Milton Anthony Warden knows how to soldier better than almost anyone, yet he’s risking his career to have an affair with his commanding officer’s wife. Both Warden and Prewitt are bound by a common bond: The Army is their heart and blood—and, possibly, their death.

This new edition features an Afterword by George Hendrick, a James Jones scholar, who discusses the novel’s origin and eventual censorship at the hands of its first publisher. Now the original language has at last been restored to the most important American novel to come out of World War II. From Here to Eternity re-creates the authentic soldier experience and captures, like nothing else, the honor and savagery of man.

“Ferocious . . . the most realistic and forceful novel I’ve read about life in the army.”—The New Yorker

James Jones (1921–1977), one of the major novelists of his generation, is known primarily as the author of fiction that probes the effects of World War II on the individual soldier. Born in Robinson, Illinois, Jones entered the U.S. Army and had the distinction of being the only individual who would become a major writer to witness the attack by the Japanese on Pearl Harbor. A member of the U.S. 27th Infantry Regiment, Jones was wounded at Guadalcanal and returned to Robinson, where he started to write about his experiences. After shelving his unpublished first novel, They Shall Inherit the Laughter, Jones completed the critically acclaimed international bestseller From Here to Eternity. Jones’s other novels are Some Came Running, The Pistol, The Thin Red Line, A Touch of Danger, and Whistle.

William Styron (1925–2006), a native of the Virginia Tidewater, was a graduate of Duke University and a veteran of the US Marine Corps. His books include The Confessions of Nat Turner, Sophie’s Choice, and Darkness Visible. He was awarded the Pulitzer Prize for Fiction, the William Dean Howells Medal, the American Book Award, the Witness to Justice Award from the Auschwitz Jewish Center Foundation, and the Légion d’Honneur. With his wife, the poet and activist Rose Styron, he lived for most of his adult life in Roxbury, Connecticut, and in Vineyard Haven, Massachusetts, where he is buried.

Praise For From Here to Eternity: A Novel (Modern Library 100 Best Novels)…

“Ferocious . . . the most realistic and forceful novel I’ve read about life in the army.”—The New Yorker
or support indie stores by buying on
Copyright © 2020 American Booksellers Association