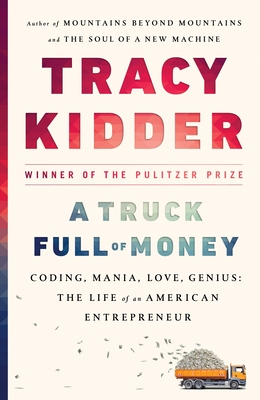 Fortune, mania, genius, philanthropy—the bestselling author of Mountains Beyond Mountains gives us the inspiring story of Paul English, the founder of Kayak and Lola.

“What kind of entrepreneur talks about making money as if it’s, well, kind of a bummer? You’ll ask yourself that question about a dozen or so pages into A Truck Full of Money, Tracy Kidder’s expertly reported, deftly written new book that tracks the rise of unconventional software executive and Kayak co-founder Paul English.”—San Francisco Chronicle

Tracy Kidder graduated from Harvard and studied at the University of Iowa. He has won the Pulitzer Prize, the National Book Award, the Robert F. Kennedy Award, and many other literary prizes. The author of Strength in What Remains, My Detachment, Mountains Beyond Mountains, Home Town, Old Friends, Among Schoolchildren, House, and The Soul of a New Machine, Kidder lives in Massachusetts and Maine.
Loading...
or support indie stores by buying on