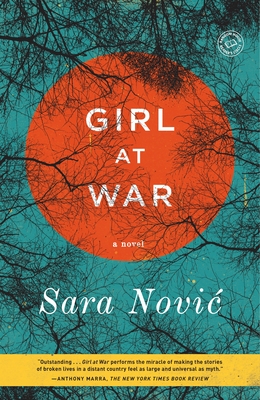 “Set in Zagreb in 1991, just prior to the outbreak of the Croatian war for independence, Girl at War is the story of Ana, a 10-year-old tomboy who enjoys spending time with her baby sister, biking around the city with her best friend, and summering with her family and friends on the Adriatic Sea. When the civil conflict escalates, Ana is forced to grow up too quickly. Debut author Nović expertly shares an astounding story of the brutality of war, the things one does to survive, and the confusion, anger, and guilt that is left in its wake. This is page-turning storytelling!”
— Dawn Rennert, The Concord Bookshop, Concord, MA
View the List

For readers of The Tiger’s Wife and All the Light We Cannot See comes a powerful debut novel about a girl’s coming of age—and how her sense of family, friendship, love, and belonging is profoundly shaped by war.

NAMED ONE OF THE BEST BOOKS OF THE YEAR BY BOOKPAGE, BOOKLIST, AND ELECTRIC LITERATURE • ALEX AWARD WINNER • LOS ANGELES TIMES BOOK PRIZE FINALIST • LONGLISTED FOR THE BAILEYS WOMEN’S PRIZE FOR FICTION

Zagreb, 1991. Ana Jurić is a carefree ten-year-old, living with her family in a small apartment in Croatia’s capital. But that year, civil war breaks out across Yugoslavia, splintering Ana’s idyllic childhood. Daily life is altered by food rations and air raid drills, and soccer matches are replaced by sniper fire. Neighbors grow suspicious of one another, and Ana’s sense of safety starts to fray. When the war arrives at her doorstep, Ana must find her way in a dangerous world.

New York, 2001. Ana is now a college student in Manhattan. Though she’s tried to move on from her past, she can’t escape her memories of war—secrets she keeps even from those closest to her. Haunted by the events that forever changed her family, Ana returns to Croatia after a decade away, hoping to make peace with the place she once called home. As she faces her ghosts, she must come to terms with her country’s difficult history and the events that interrupted her childhood years before.

Moving back and forth through time, Girl at War is an honest, generous, brilliantly written novel that illuminates how history shapes the individual. Sara Nović fearlessly shows the impact of war on one young girl—and its legacy on all of us. It’s a debut by a writer who has stared into recent history to find a story that continues to resonate today.

Praise for Girl at War

“Outstanding . . . Girl at War performs the miracle of making the stories of broken lives in a distant country feel as large and universal as myth.”—The New York Times Book Review (Editor’s Choice)

“[An] old-fashioned page-turner that will demand all of the reader’s attention, happily given. A debut novel that astonishes.”—Vanity Fair

“Shattering . . . The book begins with what deserves to become one of contemporary literature’s more memorable opening lines. The sentences that follow are equally as lyrical as a folk lament and as taut as metal wire wrapped through an electrified fence.”—USA Today

Praise For Girl at War: A Novel…

“Outstanding . . . Girl at War performs the miracle of making the stories of broken lives in a distant country feel as large and universal as myth.”—The New York Times Book Review (Editor’s Choice)

“[An] old-fashioned page-turner that will demand all of the reader’s attention, happily given. A debut novel that astonishes.”—Vanity Fair

“A shattering debut . . . The book begins with what deserves to become one of contemporary literature’s more memorable opening lines. The sentences that follow are equally as lyrical as a folk lament and as taut as metal wire wrapped through an electrified fence.”—USA Today

“[A] gripping debut novel . . . [Sara] Nović, in tender and eloquent prose, explores the challenge of how to live even after one has survived.”—O: The Oprah Magazine

“Powerful and vividly wrought . . . Nović writes about horrors with an elegant understatement. In cool, accomplished sentences, we are met with the gravity, brutality and even the mundaneness of war and loss as well as the enduring capacity to live.”—San Francisco Chronicle

“Intimate and immense . . . [Nović is] a writer whose own gravity and talent anchor this novel.”—The New York Times

“Sara Nović’s powerful debut novel . . . is an important and profoundly moving reading experience. . . . It will be interesting to see if another novelist, particularly a first-time novelist, can match Nović’s bravura, gut-punching opening section. . . . Girl at War is a superb exploration of conflict and its aftermath.”—The National

“Astonishing . . . Girl at War is an extraordinarily poised and potent debut novel, a story about grief and exile, memory and identity, and the redemptive power of love.”—Financial Times

“One of this year’s most discussed debuts . . . What makes [Girl at War] unique is that it’s not concerned with unmasking the horrors of war, as many have repeatedly done. Instead, this book is an exploration of how humans grow, prosper and move on from unthinkable times.”—Paste

“As Nović gradually reveals, you can take the girl out of the war zone, but you can’t take the war zone out of the girl. By the time Ana becomes a student at a New York university, all that violence has been bottled up inside her head for a decade. Thanks to Nović’s considerable skill, Ana’s return visit to her homeland and her past is nearly as cathartic for the reader as it is for Ana.”—Booklist (starred review)

“An unforgettable portrait of how war forever changes the life of the individual, Girl at War is a remarkable debut by a writer working with deep reserves of talent, heart, and mind.”—Gary Shteyngart, author of Little Failure and Super Sad True Love Story

Sara Nović is the author of the novel Girl at War, which won an American Library Association Award, was a Los Angeles Times Book Prize finalist, and is forthcoming in thirteen more languages. She holds an MFA in fiction and literary translation from Columbia University, and is an assistant professor of creative writing at Stockton University, a public liberal arts school in southern New Jersey. She lives in Philadelphia.
Loading...
or support indie stores by buying on