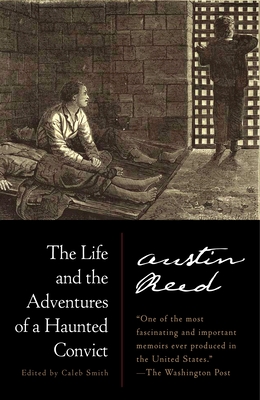 The Life and the Adventures of a Haunted Convict

The earliest known prison memoir by an African American writer—recently discovered and authenticated by a team of Yale scholars—sheds light on the longstanding connection between race and incarceration in America.

In 2009, scholars at Yale University came across a startling manuscript: the memoir of Austin Reed, a free black man born in the 1820s who spent most of his early life ricocheting between forced labor in prison and forced labor as an indentured servant. Lost for more than one hundred and fifty years, the handwritten document is the first known prison memoir written by an African American. Corroborated by prison records and other documentary sources, Reed’s text gives a gripping first-person account of an antebellum Northern life lived outside slavery that nonetheless bore, in its day-to-day details, unsettling resemblances to that very institution.

Now, for the first time, we can hear Austin Reed’s story as he meant to tell it. He was born to a middle-class black family in the boomtown of Rochester, New York, but when his father died, his mother struggled to make ends meet. Still a child, Reed was placed as an indentured servant to a nearby family of white farmers near Rochester. He was caught attempting to set fire to a building and sentenced to ten years at Manhattan’s brutal House of Refuge, an early juvenile reformatory that would soon become known for beatings and forced labor.

Seven years later, Reed found himself at New York’s infamous Auburn State Prison. It was there that he finished writing this memoir, which explores America’s first reformatory and first industrial prison from an inmate’s point of view, recalling the great cruelties and kindnesses he experienced in those places and excavating patterns of racial segregation, exploitation, and bondage that extended beyond the boundaries of the slaveholding South, into free New York.

Accompanied by fascinating historical documents (including a series of poignant letters written by Reed near the end of his life), The Life and the Adventures of a Haunted Convict is a work of uncommon beauty that tells a story of nineteenth-century racism, violence, labor, and captivity in a proud, defiant voice. Reed’s memoir illuminates his own life and times—as well as ours today.

Praise for The Life and the Adventures of a Haunted Convict

“One of the most fascinating and important memoirs ever produced in the United States.”—Annette Gordon-Reed, The Washington Post

“Remarkable . . . triumphantly defiant . . . The book’s greatest value lies in the gap it fills.”—O: The Oprah Magazine

“Reed displays virtuosic gifts for narrative that, a century and a half later, earn and hold the reader’s ear.”—Thomas Chatterton Williams, San Francisco Chronicle

“[The book’s] urgency and relevance remain undiminished. . . . This exemplary edition recovers history without permanently trapping it in one interpretation.”—The Guardian

“A sensational, novelistic telling of an eventful life.”—The Paris Review

“Lyrical and graceful in one sentence, burning with fury and hellfire in the next.”—Columbus Free Press

Praise For The Life and the Adventures of a Haunted Convict…

“[A] harrowing [portrait] of life behind bars . . . part confession, part jeremiad, part lamentation, part picaresque novel (reminiscent, at times, of Dickens and Defoe) . . . Though [Austin] Reed’s book suggests he found some solace in the act of writing, it is also a chilling reminder to the reader of the roots of an American prison system that has grown no more humane.”—Michiko Kakutani, The New York Times

“One of the most fascinating and important memoirs ever produced in the United States.”—Annette Gordon-Reed, The Washington Post

“Remarkable . . . triumphantly defiant . . . The book’s greatest value lies in the gap it fills: As writer and historian Edward Ball notes, ‘the mosaic that is the history of the common man has many missing tiles, and Reed’s book places an important piece into that mosaic.’ ”—O: The Oprah Magazine

“Reed’s book is a wild, propulsive romp. . . . A charismatic and idiosyncratic voice in perpetual rebellion, . . . Reed displays virtuosic gifts for narrative that, a century and a half later, earn and hold the reader’s ear.”—Thomas Chatterton Williams, San Francisco Chronicle

“[The book’s] urgency and relevance remain undiminished. . . . This exemplary edition recovers history without permanently trapping it in one interpretation.”—The Guardian

“A sensational, novelistic telling of an eventful life.”—The Paris Review

“What Reed left is a poetic and unflinching account that forces readers to contemplate an enduring spectacle: men behind bars in a system bent on breaking them. He describes himself as ‘haunted,’ and his memoir should haunt us with its exposure of a process designed at its origins to reduce men, whatever their color and their crimes, to worthlessness—to ruin them for life in freedom. Conditions and treatment that are still pervasive in the prisons of the United States can be traced back to a time before the blood of more than 600,000 Americans was spilled to end one peculiar institution. No one should underestimate the challenge, or the urgency, of transforming another.”—The Atlantic

“Reed’s is a powerful narrative to resurface in 2016. It’s a ghost resurrected from the archive. . . . The Life and the Adventures of a Haunted Convict belongs on a bookshelf next to The Autobiography of Malcolm X, Martin Luther King Jr.’s Letter from a Birmingham Jail, George Jackson’s Soledad Brother and other prison writings. It is a powerful reminder that those populations who many think of as ‘silenced’ did and will continue to speak out.”—Austin American-Statesman

“Lyrical and graceful in one sentence, burning with fury and hellfire in the next.”—Columbus Free Press

“Startling, instructive, and disquieting . . . The book holds both archive and mirror for the present antagonisms about racism, policing, and mass incarceration, contributing to the ongoing exploration and debates concerning American democracy and racial identity built upon black captivity.”—The Boston Review

“Reed’s fascinating story speaks movingly—in rough-hewn, utterly distinctive prose—of the many unfreedoms in American history that are overshadowed by the story of slavery: indentured servitude, reform school, prison. Reed himself emerges as a resilient, defiant figure, rejecting the logic of an institution that supposedly builds character and reforms the soul. . . . The best respect we can pay him is to let go of our expectations and listen.”—The Chronicle of Higher Education

“That this is the earliest known prison memoir written by an African American, just one year after the Dred Scott decision and on the eve of the Civil War, alone signifies its singular historical importance. But Austin Reed’s The Life and the Adventures of a Haunted Convict does far more than challenge the timeline of the black literary tradition. Its stories, as engrossing as they are horrific, invite us to peer behind the bars of a prison system at its developmental stage, when the lines between liberty and slavery, punishment and servitude, were as bent as the justice meted out by its practitioners. This extraordinary first-person account, from New York’s House of Refuge to the Auburn State Prison, exposes the roots of a prison culture that continues to haunt far too many black families today. We owe a great debt to Reed for writing it and to Caleb Smith for unraveling the mysteries of identity and authentication after its discovery a century-and-a-half later.”—Henry Louis Gates, Jr., Alphonse Fletcher University Professor, Harvard University

“The discovery story behind this memoir by a black prisoner—written 150 years ago and hidden for generations—is a modern gumshoe plot, and the tale it tells of perennial jail for the crime of blackness reads like a case study from today’s age of mass incarceration.”—Edward Ball, author of the National Book Award winner Slaves in the Family

“The voice of Austin Reed, a black man in early nineteenth-century America who was incarcerated at the tender age of ten, rises up and speaks to us now, in artful, picaresque tones, to tell of his own unbelievable suffering. He’s a riveting figure. Reed’s testimony, plucked from the void, found by chance at an estate sale, reminds us, forcefully, that people are not functions of historical narrative—the prisoner in prison, the slave in slavery—but singularities.”—Rachel Kushner, author of The Flamethrowers

“[A] compelling and haunting story.”—WXII

“[A] candid and stirring autobiography . . . Reed’s unique story is highly recommended to anyone interested in African American history or the history of crime and punishment in the United States.”—Library Journal (starred review)

“A moving, significant narrative that affords both an elegantly produced glimpse of nineteenth-century prison life and a new chapter in African-American history through a convict’s eyes.”—Kirkus Reviews

“Reed’s account of his troubled youth, written in the nineteenth century but never before published, provides a fascinating look into the prison system of antebellum America. . . . A remarkable accomplishment [and] a remarkable discovery.”—Publishers Weekly

Austin Reed was born in Rochester, New York, in 1823. He wrote this memoir around 1858–59, during his incarceration in Auburn State Prison. The date of his death is unknown.

Caleb Smith is a professor of English at Yale University and the author of The Prison and the American Imagination and The Oracle and the Curse.

David W. Blight is Class of 1954 Professor of American History and director of the Gilder Lehrman Center for the Study of Slavery, Resistance, and Abolition at Yale University. He is the author of Race and Reunion, A Slave No More, and the forthcoming Frederick Douglass: A Life.

Robert B. Stepto is a professor of African American studies, American studies, and English at Yale University. His publications include From Behind the Veil, Blue as the Lake, and A Home Elsewhere.
Loading...
or
Not Currently Available for Direct Purchase