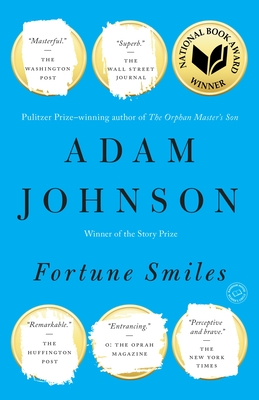 The National Book Award–winning story collection from the author of The Orphan Master’s Son offers something rare in fiction: a new way of looking at the world.

Throughout these six stories, Pulitzer Prize winner Adam Johnson delves deep into love and loss, natural disasters, the influence of technology, and how the political shapes the personal, giving voice to the perspectives we don’t often hear.

In “Nirvana,” a programmer whose wife has a rare disease finds solace in a digital simulacrum of the president of the United States. In “Hurricanes Anonymous,” a young man searches for the mother of his son in a Louisiana devastated by Hurricanes Katrina and Rita. “George Orwell Was a Friend of Mine” follows a former warden of a Stasi prison in East Germany who vehemently denies his past, even as pieces of it are delivered in packages to his door. And in the unforgettable title story, Johnson returns to his signature subject, North Korea, depicting two defectors from Pyongyang who are trying to adapt to their new lives in Seoul, while one cannot forget the woman he left behind.

AND ONE OF THE BEST BOOKS OF THE YEAR BY The Washington Post  • NPR • Marie Claire • St. Louis Post-Dispatch • BuzzFeed • The Daily Beast • Los Angeles Magazine • The Independent • BookPage • Kirkus Reviews

“Haunting, harrowing . . . Johnson’s writing is as rich in compassion as it is in invention, and that rare combination makes Fortune Smiles worth treasuring.”—USA Today

“Masterful . . . Each [story] is a miniature demonstration of why his remarkable novel The Orphan Master’s Son won the 2013 Pulitzer Prize for fiction.”—The Washington Post

“[Adam Johnson] is always perceptive and brave; his lines always sing and strut and sizzle and hush and wash and blaze over the reader.”—The New York Times Book Review

“Remarkable . . . the best short story collection since Tenth of December . . . Johnson is one of America’s greatest living writers.”—The Huffington Post

“Haunting, harrowing . . . Johnson’s writing is as rich in compassion as it is in invention, and that rare combination makes Fortune Smiles worth treasuring.”—USA Today

“One of the most original and compelling voices in contemporary American fiction.”—Entertainment Weekly

“Johnson packs more voice in his stories than most authors do in a novel.”—Esquire

“Stunning . . . Johnson is a writer of uncanny insight and compassion and Fortune Smiles is a wise, poignant and important book. It should not be missed.”—Toronto Star

“The best stories stretch well beyond their first and last words. They’re more than the opening scene; they invite the reader to imagine what came before and what will come after. They’re alive and they’re limitless. That’s exactly what the best stories in Fortune Smiles are like.”—NPR

“[A] bold and deeply wise collection.”—BuzzFeed

“Even as Johnson’s subject matter bends genre is a way that is assertively contemporary, much of his prose is classically beautiful. . . . The speculative fiction of Margaret Atwood and David Mitchell, which also trade in inherited traumas and personal resilience, come to mind, as do George Saunders’ darkly satiric visions of near-future America.”—The New Republic

“Johnson has a rare combination of inventiveness, intellectual pyrotechnics and emotional sophistication. . . . These stories are treasures.”—BBC

“Adam Johnson returns with this riveting collection of short stories, each reflecting the darkly imagined, slightly surreal point of view that animated his Pulitzer Prize–winning novel, The Orphan Master’s Son. . . . He’s a compelling writer, in any form.”—San Jose Mercury-News

“[Adam Johnson] serves up six sinewy stories that shock and surprise in his edgy, inviting Fortune Smiles. . . . [They’re] compulsively readable tales about characters whose lives are largely ignored, undervalued, or simply uncharted and whose voices we seldom hear.”—Elle

“The stories in Fortune Smiles fizz with imagination, miniature worlds exploding onto the page. Adam Johnson’s prose is so pared-down, like the setting for precious stones, he gives us just what’s necessary to let the facets sparkle, without distraction. I loved this book!”—M. L. Stedman, New York Times bestselling author of The Light Between Oceans

“How do you follow a Pulitzer Prize–winning novel? For [Adam] Johnson, the answer is a story collection, and the tales are hefty and memorable. . . . In the title story, two North Korean criminals adjust to post-defection life in South Korea. . . . Often funny, even when they’re wrenchingly sad, the stories provide one of the truest satisfactions of reading: the opportunity to sink into worlds we otherwise would know little or nothing about.”—Publishers Weekly (starred review)

Adam Johnson is the author of Fortune Smiles, winner of the National Book Award and the Story Prize and a finalist for the Los Angeles Times Book Prize, and The Orphan Master’s Son, winner of the Pulitzer Prize, the Dayton Literary Peace Prize, and the California Book Award and a finalist for the National Book Critics Circle Award. Johnson’s other awards include a Guggenheim Fellowship, a Whiting Writers’ Award, a National Endowment for the Arts Fellowship, and a Stegner Fellowship; he was also a finalist for the New York Public Library’s Young Lions Award. His previous books are Emporium, a short story collection, and the novel Parasites Like Us. Johnson teaches creative writing at Stanford University and lives in San Francisco with his wife and children.