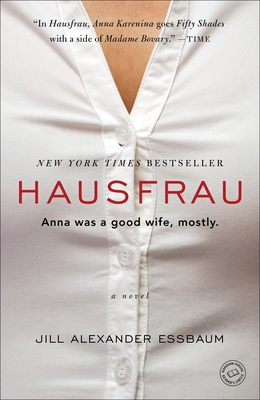 Praise For Hausfrau: A Novel…

“In Hausfrau, Anna Karenina goes Fifty Shades with a side of Madame Bovary.”—Time

“Elegant . . . There is much to admire in [Jill Alexander] Essbaum’s intricately constructed, meticulously composed novel, including its virtuosic intercutting of past and present.”—Chicago Tribune

“In Jill Alexander Essbaum’s promising novel, we meet Anna Benz, an increasingly desperate American housewife and mother of three in her late thirties, positively brimming with ennui. . . . We’re in literary territory as familiar as Anna’s name, but Essbaum makes it fresh with sharp prose and psychological insight.”—San Francisco Chronicle

“This marvelously quiet book is psychologically complex and deeply intimate—as sexy as it is sad. . . . Though Anna, as heroine, has literary precedent, Essbaum has gracefully combined the mundane of the familial, graphic sex scenes, linguistics lessons and precise passages of psychological expertise into something utterly original. Essbaum has written one of the smartest novels in recent memory.”—The Dallas Morning News

“A powerful, lyrical novel . . . Hausfrau boasts taut pacing and melodrama, but also a fully realized heroine as love-hateable as Emma Bovary and a poet’s fascination with language. . . . The beauty of Hausfrau, however, is the freshness it brings to a trope seemingly beaten into the ground. . . . In Anna, we don’t see a sinfully passionate naif throwing her life away on a doomed quest for love, à la Bovary or Karenina. Such a parallel hardly seems possible in these liberal modern times when divorce is common and premarital sex expected. But the numbed, uncertain person at the heart of Hausfrau is uniquely compelling.”—The Huffington Post

“Hausfrau, a psychological trip about ‘a good wife, mostly’ who enters into a series of messy affairs and impulsive adventures, is brain-surgically constructed to fascinate you, entertain you, and then make you question what a life lived with meaning looks like—all with a sense of poetic discipline and introspection.”—Los Angeles Magazine

“Over a century after the publication of Madame Bovary and Anna Karenina, poet Essbaum proves in her debut novel that there is still plenty of psychic territory to cover in the story of ‘a good wife, mostly.’ . . . The realism of Anna’s dilemmas and the precise construction of the novel are marvels of the form. . . . This novel is masterly as it moves toward its own inescapable ending, and Anna is likely to provoke strong feelings in readers well after the final page.”—Publishers Weekly (starred review)

“[Anna’s] story will fascinate and thrill the most modern readers, even if you don’t agree with her decisions.”—Bustle

“Hausfrau packs romance, sex, and infidelity into the story about a woman searching for meaning in her life.”—PopSugar

“In Anna Benz, Essbaum has created a genuine, complex woman whose journey—no matter how dark it may be—reveals truths as only great literature can. She may have her roots in Tolstoy’s Anna Karenina or Flaubert’s Emma Bovary or Ibsen’s Hedda Gabler, but she is a thoroughly modern and distinct character. Hausfrau is not just an exceptional first novel, it is an extraordinary novel—period.”—Shelf Awareness

“[Essbaum’s protagonist] shares more than her name with that classic adulteress, Anna Karenina, but Essbaum has given a deft, modern facelift to the timeless story of a troubled marriage and tragic love in this seductive first novel.”—Booklist

“With an elegance, precision, and surehandedness that recalls Marguerite Duras’s The Lover and Anita Brookner’s Hotel du Lac, Jill Alexander Essbaum gives us this exquisite tale of an expatriate American wife living in Switzerland and her sexual and psychic unraveling. Hausfrau stuns with its confidence and severe beauty, its cascading insights into the nature of secrets, the urgency of compulsion and the difficulty of freedom. This is a rare and remarkable debut.”—Janet Fitch, #1 New York Times bestselling author of White Oleander

“I was mesmerized by this book. Hausfrau creates a complete, engrossing, and particular world where nothing is as easy as it should be, according to the hopeful stories we tell ourselves. It’s a corrective novel, taking character, destiny, and our choices as seriously as a novelist can.”—Sheila Heti, author of How Should a Person Be?

“I loved this brilliant, insightful, and devastating novel about Anna: trains . . . adultery . . . the punctual, rigid Swiss . . . Jungian analysis . . . anhedonia . . . more adultery and more trains . . . and Jill Alexander Essbaum’s beautiful sentences strewn with sharp thorns that prick and cut straight into the heart of a woman’s unfulfilled life. I wish I had written it.”—Lily Tuck, National Book Award–winning author of The News from Paraguay

“A stunningly written, hauntingly paced book. Anna Benz has the weight of a classic heroine—isolated yet crowded—but she is utterly modern in Jill Alexander Essbaum’s hands. ReadingHausfrau is like staring at a painting that simultaneously seduces and disturbs. Even when you want to turn away, you find your feet are planted to the floor.”—Sloane Crosley, author of I Was Told There’d Be Cake

“Hot damn, is Hausfrau a beautiful, heart-wrenching novel. It casts a spell that doesn’t stop working until that wonderful final line. Jill Alexander Essbaum has a seismic talent, and it shows on every page of her first novel. Just read this bad boy. Like right now.”—Victor LaValle, author of The Devil in Silver

“The book that will have everyone talking.”—Cosmopolitan (U.K.)

“This slow-burning literary novel of marital disintegration will leave you in bits. It’s a bleak, but beautiful read, with echoes of Tolstoy’s Anna Karenina.”—Glamour (U.K.)

“This book is sheer sex and madness, written in one of the most amazing voices I’ve ever read.”—Bookriot

“Hausfrau is authentic in its depiction of a strikingly passive woman whose betrayals overwhelm her. There are distinct echoes of Anna Karenina. But it is the wordcraft, structure and restrained intimacy of this first novel that make it a standout.”—BBC

“[An] insightful and shocking portrait of a woman on the edge.”—Woman & Home (U.K.)

“With more than a passing resemblance to Anna Karenina . . . [Hausfrau will] be a book club winner.”—Stylist (U.K.)

“The ghost of Anna Karenina haunts the poet Jill Alexander Essbaum’s debut, Hausfrau, about an American in Zürich with the perfect husband, perfect sons and perfect home; but she is far from the perfect wife.”—Harper’s Bazaar (U.K.)