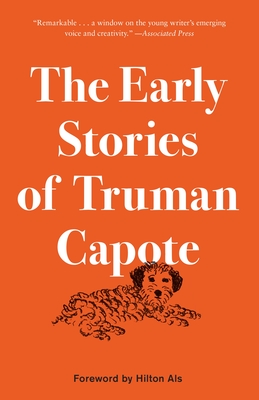 The early fiction of one of the nation’s most celebrated writers, Truman Capote, as he takes his first bold steps into the canon of American literature

Recently rediscovered in the archives of the New York Public Library, these short stories provide an unparalleled look at Truman Capote writing in his teens and early twenties, before he penned such classics as Other Voices, Other Rooms, Breakfast at Tiffany’s, and In Cold Blood. This collection of more than a dozen pieces showcases the young Capote developing the unique voice and sensibility that would make him one of the twentieth century’s most original writers.

Spare yet heartfelt, these stories summon our compassion and feeling at every turn. Capote was always drawn to outsiders—women, children, African Americans, the poor—because he felt like one himself from a very early age. Here we see Capote’s powers of empathy developing as he depicts his characters struggling at the margins of their known worlds. A boy experiences the violence of adulthood when he pursues an escaped convict into the woods. Petty jealousies lead to a life-altering event for a popular girl at Miss Burke’s Academy for Young Ladies. In a time of extraordinary loss, a woman fights to save the life of a child who has her lover’s eyes.

In these stories we see early signs of Capote’s genius for creating unforgettable characters built of complexity and yearning. Young women experience the joys and pains of new love. Urbane sophisticates are worn down by cynicism. Children and adults alike seek understanding in a treacherous world. There are tales of crime and violence; of racism and injustice; of poverty and despair. And there are tales of generosity and tenderness; compassion and connection; wit and wonder. Above all there is the developing voice of a writer born in the Deep South who will use and eventually break from that tradition to become a literary figure like no other.

With a foreword by the celebrated New Yorker critic Hilton Als, this volume of early stories is essential for understanding how a boy from Monroeville, Alabama, became a legend in American literature.

Praise for The Early Stories of Truman Capote

“Succeeds at conveying the writer’s youthful rawness . . . These stories capture a moment when Capote was hungry to capture the rural South, the big city, and the subtle emotions that so many around him were determined to keep unspoken.”—USA Today

“A window on the young writer’s emerging voice and creativity . . . Capote’s ability to conjure a time, place and mood with just a few sentences is remarkable.”—Associated Press

Truman Capote was born in New Orleans on September 30, 1924. In 1948 his first novel, Other Voices, Other Rooms, was published to international critical acclaim, assuring Capote a place among the prominent postwar American writers. He won the O. Henry Memorial Short Story Prize twice and was a member of the National Institute of Arts and Letters. His other works include Breakfast at Tiffany’s, The Grass Harp, and the nonfiction masterpiece In Cold Blood. Truman Capote died on August 25, 1984 in Los Angeles.

Hilton Als is a staff writer for The New Yorker. His work also appears in The New York Review of Books. He is the author of The Women and White Girls. He lives in New York.

Praise For The Early Stories of Truman Capote…

“[The Early Stories of Truman Capote] succeeds at conveying the writer’s youthful rawness. . . . These stories capture a moment when Capote was hungry to capture the rural South, the big city, and the subtle emotions that so many around him were determined to keep unspoken.”—USA Today

“A window on the young writer’s emerging voice and creativity . . . Capote’s ability to conjure a time, place and mood with just a few sentences is remarkable.”—Associated Press

“[Capote’s early] stories are special. Not just because they give a glimpse of an author finding his voice; or for the traces of his masterpieces. But also because they stand in their own right as lovely vignettes of the lives of the lonely, broken and troubled. . . . If you consider they were written when he was a child—aged between eleven and nineteen—then they become breathtaking in their precocity, craftsmanship, simplicity and the tenderness he became renowned for.”—The Independent (U.K.)

“These ten-plus stories were written when Capote was a teenager and young man and will shed light on his subsequent work while remaining sharply observed pleasures in their own right.”—Library Journal

“[A] gathering of the great American prose stylist’s earliest pieces, published for the first time . . . Students of both Capote and the short story will find this instructive and entertaining.”—Kirkus Reviews
or support indie stores by buying on
Copyright © 2020 American Booksellers Association