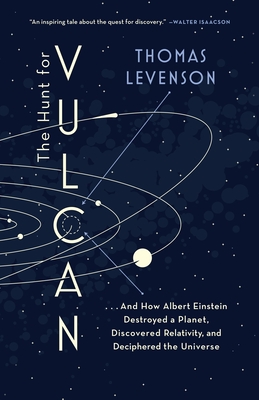 The Hunt for Vulcan

. . . And How Albert Einstein Destroyed a Planet, Discovered Relativity, and Deciphered the Universe

The captivating, all-but-forgotten story of Isaac Newton, Albert Einstein, and the search for a planet that never existed

For more than fifty years, the world’s top scientists searched for the “missing” planet Vulcan, whose existence was mandated by Isaac Newton’s theories of gravity. Countless hours were spent on the hunt for the elusive orb, and some of the era’s most skilled astronomers even claimed to have found it.

There was just one problem: It was never there.

In The Hunt for Vulcan, Thomas Levenson follows the visionary scientists who inhabit the story of the phantom planet, starting with Isaac Newton, who in 1687 provided an explanation for all matter in motion throughout the universe, leading to Urbain-Jean-Joseph Le Verrier, who almost two centuries later built on Newton’s theories and discovered Neptune, becoming the most famous scientist in the world. Le Verrier attempted to surpass that triumph by predicting the existence of yet another planet in our solar system, Vulcan.

It took Albert Einstein to discern that the mystery of the missing planet was a problem not of measurements or math but of Newton’s theory of gravity itself. Einstein’s general theory of relativity proved that Vulcan did not and could not exist, and that the search for it had merely been a quirk of operating under the wrong set of assumptions about the universe. Levenson tells the previously untold tale of how the “discovery” of Vulcan in the nineteenth century set the stage for Einstein’s monumental breakthrough, the greatest individual intellectual achievement of the twentieth century.

A dramatic human story of an epic quest, The Hunt for Vulcan offers insight into how science really advances (as opposed to the way we’re taught about it in school) and how the best work of the greatest scientists reveals an artist’s sensibility. Opening a new window onto our world, Levenson illuminates some of our most iconic ideas as he recounts one of the strangest episodes in the history of science.

Praise for The Hunt for Vulcan

“Engaging . . . At heart, this is a story about how science advances, one insight at a time. But the immediacy, almost romance, of Levenson’s writing makes it almost novelistic.”—The Washington Post

Praise For The Hunt for Vulcan: . . . And How Albert Einstein Destroyed a Planet, Discovered Relativity, and Deciphered the Universe…

“Engaging . . . At heart, this is a story about how science advances, one insight at a time. But the immediacy, almost romance, of [Thomas] Levenson’s writing makes it almost novelistic.”—The Washington Post

“Captures the drama of the tireless search for this celestial object.”—Science

“The Hunt for Vulcan is a short, beautifully produced book that tells a cautionary tale. . . . Levenson is a breezy writer who renders complex ideas in down-to-earth language . . . and colorfully illustrates the limits of scientific theory as it faces new data and even more persuasive theories.”—The Boston Globe

“Thomas Levenson wonderfully tells the story of Vulcan. . . . Looping through science history from Isaac Newton onwards, Levenson elegantly reveals the evolutionary nature of scientific thought, and the marvel of the revolution that Einstein wrought.”—Nature

“An essential read . . . a compelling story that successfully portrays how science deals with ambiguity . . . The Hunt for Vulcan succeeds spectacularly at displaying the intricate, confusing, and sometimes quirky way science progresses.”—Ars Technica

“This delightful and enlightening drama tells the story of the hunt for a planet that did not exist and how Einstein resolved the mystery with the most beautiful theory in the history of science. The Hunt for Vulcan is an inspiring tale about the quest for discovery and the challenges and joys of understanding our universe.”—Walter Isaacson

“The Hunt for Vulcan is equal to the best science writing I’ve read anywhere, by any author. Beautifully composed, rich in historical context, deeply researched, it is, above all, great storytelling. Levenson gives a true picture of the scientific enterprise, with all its good and bad guesses, wishful thinking, passion, human ego, and desire to know and understand this strange and magnificent cosmos we find ourselves in.”—Alan Lightman, author of The Accidental Universe

“Thomas Levenson’s brilliance as a writer is in setting the evolution of scientific ideas into their appropriate historical contexts, allowing us to see their wider implications. In this engaging, informative book, laced with lovely anecdotes, Levenson elegantly teaches us about both the laws of physics and the less law-abiding ways in which physics advances occur.”—Lisa Randall, professor of physics, Harvard University, and author of Dark Matter and the Dinosaurs

“Levenson deftly draws readers into a quest that shows how scientists think and argue, as well as how science advances: one discovery at a time.”—Publishers Weekly

Thomas Levenson is a professor of science writing at MIT. He is the author of several books, including The Hunt for Vulcan, Einstein in Berlin, and Newton and the Counterfeiter: The Unknown Detective Career of the World's Greatest Scientist. He has also made ten feature-length documentaries (including a two-hour Nova program on Einstein) for which he has won numerous awards.
Loading...
or
Not Currently Available for Direct Purchase