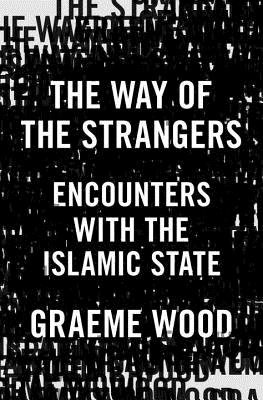 The Way of the Strangers (Hardcover)

Encounters with the Islamic State

What does ISIS really want? This is the definitive account of the strategy, psychology, and fundamentalism driving the Islamic State.

NAMED ONE OF THE BEST BOOKS OF THE YEAR BY FOREIGN AFFAIRS • “Worthy of Joseph Conrad . . . gripping, sobering and revelatory.”—Tom Holland, New Statesman

The Islamic State inspired a wave of true believers to travel to Syria from Europe, America, and the Middle East, in numbers not seen since the Crusades. What compelled tens of thousands of men and women to leave comfortable, privileged lives to join a death cult in the desert? Steven Pinker called Graeme Wood’s analysis of this phenomenon in The Atlantic “fascinating, terrifying, occasionally blackly humorous.” In The Way of the Strangers, Wood uses character study, analysis, and original reporting to take us further into the Islamic State’s apocalyptic vision.

Though the Islamic State has lost territory, it threatens to rise again, and its followers are plotting on every continent. From the streets of Cairo to the mosques of London, Wood meets with supporters, recruiters, and scholars and asks them why they believe that killing and dying for this cause is the only path to Paradise. With a new afterword, The Way of the Strangers uncovers the theology and emotional appeal of this resilient group and explores its idiosyncratic, coherent approach to Islam. Just as Lawrence Wright’s The Looming Tower explained the rise of Al Qaida, this book will shape our understanding of a new and deadlier generation of terrorists.

Praise for The Way of the Strangers

“The Way of the Strangers represents journalism at its best: vivid writing, indefatigable legwork, and fearless analysis.”—Robert D. Kaplan, author of The Return of Marco Polo’s World

“Wood is a brilliant analyst and storyteller, and his firsthand reporting and language abilities make him the most reliable commentator on the Islamic State that I have read. His wit matches his intelligence (’Well-behaved Salafis seldom make history’)—you don't get through any two pages in his book without a good laugh.”—Peter Theroux, author of Sandstorms: Days and Nights in Arabia

“Excruciatingly well observed and devastatingly honest . . . This is the first and only book about the Islamic State to expose, explain, and ultimately undermine its ideology with the relentless irony that comes from blending deep knowledge with hands-on experience. Wood makes it impossible not to laugh, despite the horrors.”—Elisabeth Kendall, senior research fellow in Arabic and Islamic studies, University of Oxford

Graeme Wood is a national correspondent for The Atlantic. He has written for The New Republic, The New Yorker, Bloomberg Businessweek, The American Scholar, The Wall Street Journal, The New York Times, and many other publications. He was the 2014–2015 Edward R. Murrow Press Fellow at the Council on Foreign Relations, and he teaches in the political science department at Yale University.

Praise For The Way of the Strangers: Encounters with the Islamic State…

“Readers are taken on a global journey to meet the frothing fans of ISIS. . . . [Graeme] Wood wants to know these people, to get in their skin, to understand how they see the world. Unlike most journalists writing about Islam today, there is no partisan axe to grind here, no hidden agenda to subtly advance. . . . To these troubled men, Islam is not an opiate of the masses; it is a euphoric, reality-bending, and ultimately self-annihilating psychedelic.”—New Republic

“[Graeme Wood] shows, convincingly, that the stifling and abhorrent practices of the Islamic State are rooted in Islam itself—not mainstream Islam, but in scriptures and practices that have persisted for centuries. . . . The Islamic State, such as it is, is a dangerous place, and Wood’s book amounts to a tour around its far edges.”—Dexter Filkins, The New York Times Book Review (Editors’ Choice)

“Worthy of Joseph Conrad . . . In a field where there has admittedly been little competition, [Wood’s] book ranks as the funniest yet written on Islamic State. As in many a British sitcom, the comedy mostly emerges from the disequilibrium between the scale of his characters’ pretensions and ambitions and the banality of their day-to-day lives. . . . Gripping, sobering and revelatory.”—New Statesman (UK)

“The best way to defeat the Islamic State is to understand it. And to do that, the best place to start is [The Way of the Strangers]. . . . A series of gripping, fascinating portraits. . . . Wood has the talented journalist’s skill for interview and observation. He’s an astute psychologist and a good writer to boot. . . . It’s a great read. But more importantly, Wood’s book reveals truths about ISIS that are hiding in plain sight—but that our leaders make themselves willfully ignorant of. They ought to read his book, too.”—The Week

“Indispensable and gripping . . . From Mosul to Melbourne, from Cairo to Tokyo, from London to Oslo, from Connecticut to California, Graeme Wood’s quest to understand the Islamic State is a round-the-world journey to the end of the night. As individuals, the men he encounters are misfits, even losers. But their millenarian Islamist ideology makes them the most dangerous people on the planet.”—Niall Ferguson, senior fellow, Hoover Institution, Stanford University, author of The War of the World

“Over the course of its short life, the Islamic State has inspired millions, thousands of whom have rallied to its cause in search of a glorious death. But why? Are its devotees nothing more than sadists and two-bit mafiosi for whom religion is a fig leaf and who will fade away in the face of military defeat? In this essential book, Graeme Wood draws on more than a decade of reporting to demolish these and other comforting deceptions. The Islamic State’s devotees are true believers indeed, and their nightmarish vision will haunt our world for decades to come, regardless of what happens on the battlefield.”—Reihan Salam, executive editor, National Review

“Graeme Wood is America’s foremost interpreter of ISIS as a world-historical phenomenon. In The Way of the Strangers, he has given us the definitive work to date on the origins, plans, and meaning of the world’s most dangerous terrorist organization. Wood is a fearless, relentlessly curious, and magnetically interesting writer who takes us on an intellectual and theological journey to the darkest places on the planet, yet he manages to do this without despairing for our collective future. This book is a triumph of journalism.”—Jeffrey Goldberg, editor in chief, The Atlantic

“With coolheaded sensitivity, Graeme Wood pulls together history, religion, and shoe-leather reporting to illuminate what will continue to be one the biggest geopolitical challenges of our time, the rise of the Islamic State.”—Admiral James Stavridis, USN, supreme allied commander at NATO; dean emeritus, the Fletcher School of Law and Diplomacy, Tufts University; operating executive, the Carlyle Group; chair of the board of counselors, McLarty Associates

“The Obama administration insisted that ISIS had nothing to do with Islam, and Trump and his advisers say that Islam hates us. There had to be something between these two erroneous extremes, and that something is the scholarship in Graeme Wood’s The Way of the Strangers. It is a balanced account of how terrorists, while in no way representing all of the world’s 1.5 billion Muslims, take strength from some authentic Islamic narratives.  ISIS is down but not yet out. It’s time we understood them.”—Michael Hayden, former CIA director