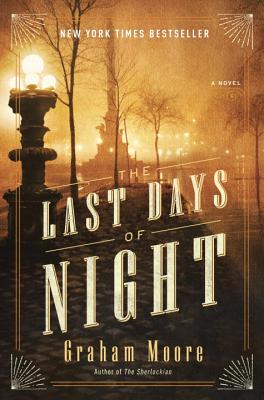 The Last Days of Night

NEW YORK TIMES BESTSELLER • “A world of invention and skulduggery, populated by the likes of Edison, Westinghouse, and Tesla.”—Erik Larson

From Graham Moore, the Oscar-winning screenwriter of The Imitation Game and New York Times bestselling author of The Sherlockian, comes a thrilling novel—based on actual events—about the nature of genius, the cost of ambition, and the battle to electrify America.

New York, 1888. Gas lamps still flicker in the city streets, but the miracle of electric light is in its infancy. The person who controls the means to turn night into day will make history—and a vast fortune. A young untested lawyer named Paul Cravath, fresh out of Columbia Law School, takes a case that seems impossible to win. Paul’s client, George Westinghouse, has been sued by Thomas Edison over a billion-dollar question: Who invented the light bulb and holds the right to power the country?

The case affords Paul entry to the heady world of high society—the glittering parties in Gramercy Park mansions, and the more insidious dealings done behind closed doors. The task facing him is beyond daunting. Edison is a wily, dangerous opponent with vast resources at his disposal—private spies, newspapers in his pocket, and the backing of J. P. Morgan himself. Yet this unknown lawyer shares with his famous adversary a compulsion to win at all costs. How will he do it?

In obsessive pursuit of victory, Paul crosses paths with Nikola Tesla, an eccentric, brilliant inventor who may hold the key to defeating Edison, and with Agnes Huntington, a beautiful opera singer who proves to be a flawless performer on stage and off. As Paul takes greater and greater risks, he’ll find that everyone in his path is playing their own game, and no one is quite who they seem.

“A satisfying romp . . . Takes place against a backdrop rich with period detail . . . Works wonderfully as an entertainment . . . As it charges forward, the novel leaves no dot unconnected.”—Noah Hawley, The New York Times Book Review

Praise For The Last Days of Night: A Novel…

“A satisfying romp . . . Takes place against a backdrop rich with period detail . . . Works wonderfully as an entertainment . . . As it charges forward, the novel leaves no dot unconnected.”—Noah Hawley, The New York Times Book Review

“A fascinating portrait of American inventors . . . Moore crafts a compelling narrative out of [Paul] Cravath’s cunning legal maneuvers and [Nikola] Tesla’s world-changing tinkering, while a story line on opera singer Agnes Huntington has the mysterious glamour of The Great Gatsby. . . . Moore weaves a complex web. . . .  He conjures Gilded Age New York City so vividly, it feels like only yesterday.”—Entertainment Weekly

“A model of superior historical fiction . . . Graham Moore digs deep into long-forgotten facts to give us an exciting, sometimes astonishing story of two geniuses locked in a brutal battle to change the world. . . . [A] brilliant journey into the past.”—The Washington Post

“Devil in the White City fans, you'll adore this one. . . . Secret societies, private spites, vast fortunes—this book has it all. But the way all its stories fit together at the end will make you realize that everyone was playing their own game all along. But of course, only one will win.”—Refinery 29

“A marvelous legal thriller set in a magical time when inventions were truly wonders, [Moore] knows how to grab your attention and not let go. . . . This is historical fiction at its very best. . . . The Last Days of Night is just as crackling as the electricity at its very core.”—Fredericksburg Free Lance-Star

“Moore’s writing is sharp and as energized as his topic. . . . This is a riveting book that will hold your attention and will illuminate many on the birth of light in America. Part legal thriller, part romance, injected with a history lesson. Worth the read.”—Historical Novel Society

“Mesmerizing, clever, and absolutely crackling, The Last Days of Night is a triumph of imagination. Graham Moore has chosen Gilded Age New York as his playground, with outsized characters—Edison, Tesla, Westinghouse—as his players. The result is a beautifully researched, endlessly entertaining novel that will leave you buzzing.”—Gillian Flynn, author of Gone Girl

“In The Last Days of Night, Graham Moore takes us back to the dawn of light—electric light—into a world of invention and skulduggery, populated by the likes of Edison, Westinghouse, Tesla, and the novel’s hero, a young lawyer named Paul Cravath (a name that will resonate with ambitious law students everywhere). It’s part legal thriller, part tour of a magical time—the age of wonder—and once you’ve finished it, you’ll find it hard to return to the world of now.”—Erik Larson, author of The Devil in the White City

“The Last Days of Night is a wonder, a riveting historical novel that is part legal thriller, part techno-suspense. This fast-paced story about the personal and legal clash over the invention of the light bulb is a tale of larger-than-life characters and devious doings, and a significant meditation on the price we as a society pay for new technology. . . . Thoughtful and hugely entertaining.”—Scott Turow

Graham Moore is the New York Times bestselling author of The Sherlockian and the Academy Award–winning screenwriter for The Imitation Game, which also won a Writers Guild of America Award for best adapted screenplay. Moore was born in Chicago, received a B.A. in religious history from Columbia University in 2003, and now lives in Los Angeles.