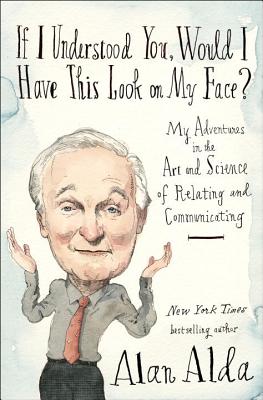 If I Understood You, Would I Have This Look on My Face?

My Adventures in the Art and Science of Relating and Communicating

NEW YORK TIMES BESTSELLER • Award-winning actor Alan Alda tells the fascinating story of his quest to learn how to communicate better, and to teach others to do the same. With his trademark humor and candor, he explores how to develop empathy as the key factor.

“Invaluable.”—Deborah Tannen, #1 New York Times bestselling author of You’re the Only One I Can Tell and You Just Don’t Understand

Alan Alda has been on a decades-long journey to discover new ways to help people communicate and relate to one another more effectively. If I Understood You, Would I Have This Look on My Face? is the warm, witty, and informative chronicle of how Alda found inspiration in everything from cutting-edge science to classic acting methods. His search began when he was host of PBS’s Scientific American Frontiers, where he interviewed thousands of scientists and developed a knack for helping them communicate complex ideas in ways a wide audience could understand—and Alda wondered if those techniques held a clue to better communication for the rest of us.

In his wry and wise voice, Alda reflects on moments of miscommunication in his own life, when an absence of understanding resulted in problems both big and small. He guides us through his discoveries, showing how communication can be improved through learning to relate to the other person: listening with our eyes, looking for clues in another’s face, using the power of a compelling story, avoiding jargon, and reading another person so well that you become “in sync” with them, and know what they are thinking and feeling—especially when you’re talking about the hard stuff.

Drawing on improvisation training, theater, and storytelling techniques from a life of acting, and with insights from recent scientific studies, Alda describes ways we can build empathy, nurture our innate mind-reading abilities, and improve the way we relate and talk with others. Exploring empathy-boosting games and exercises, If I Understood You is a funny, thought-provoking guide that can be used by all of us, in every aspect of our lives—with our friends, lovers, and families, with our doctors, in business settings, and beyond.

“Alda uses his trademark humor and a well-honed ability to get to the point, to help us all learn how to leverage the better communicator inside each of us.”—Forbes

“Alda, with his laudable curiosity, has learned something you and I can use right now.”—Charlie Rose

Praise For If I Understood You, Would I Have This Look on My Face?: My Adventures in the Art and Science of Relating and Communicating…

“Alan Alda is a man with a mission. He began with a passion to help scientists communicate with a lay audience, then realized that the skills and insights of improv that he’d learned as an actor could be transformative for everyone for whom communication is essential. And that is who will find his book invaluable: everyone.”—Deborah Tannen, #1 New York Times bestselling author of You’re the Only One I Can Tell and You Just Don’t Understand

“Alda’s curiosity, intelligence and desire to wipe out baffled and bewildered faces make a compelling case for clarity, communication and, always, empathy.”—Pittsburgh Post-Gazette

“Bright, breezy, and upbeat . . . In writing this book, Alda follows his own advice: Communicate through storytelling.”—Washington Independent Review of Books

“A swift and enjoyable journey.”—PopMatters

“Alda uses his trademark humor and a well-honed ability to get to the point, to help us all learn how to leverage the better communicator inside each of us.”—Forbes

“[Alda] was frustrated that men and women of science were not able to get their points across—to the public, the media, the government. Turned out they had never been trained to do so. So Alda set out to do something about it . . . Aided by his warm, conversational style, Alda’s message shows that the lessons also apply to the rest of us—and at a time when we could really use it.”—Milwaukee Journal Sentinel

“Alan Alda breaks down the importance of face-to-face interaction in his new book, If I Understood You, Would I Have This Look On My Face? Alda developed this compelling conversation technique to help scientists distill down complex scientific principles for a general audience.”—Entrepreneur Magazine

“A distinguished actor and communication expert shows how to avoid ‘the snags of misunderstanding’ that plague verbal interactions between human beings. . . . A sharp and informative guide to communication.”—Kirkus Reviews

“An enlightening and thoughtful combination of shared experience and advice.”—Booklist

“In this charming, witty, and thought-provoking book, full of rich anecdotes, Alan Alda describes some of the tools of communication that he teaches in his work with the Alan Alda Center for Communicating Science and shows how everyone—from lovers to politicians to scientists—can benefit from being better communicators.”—Lawrence M. Krauss, author of The Greatest Story Ever Told . . . So Far

“I’ve spent a lifetime trying to understand and use the art of communication. And then comes this fellow Alda—actor, interviewer, academic, and, mostly, student—who teaches me new, useable ideas. Communicating is at the heart of connectedness. Alda, with his laudable curiosity, has learned something you and I can use right now.”—Charlie Rose

Alan Alda has earned international recognition as an actor, writer, and director. He has won seven Emmy Awards, has received three Tony nominations, is an inductee of the Television Hall of Fame, and was nominated for an Academy Award for his role in The Aviator. Alda played Hawkeye Pierce on the classic television series M*A*S*H, and his many films include Crimes and Misdemeanors, Everyone Says I Love You, Manhattan Murder Mystery, and Bridge of Spies. Alda is an active member of the science community, having hosted the award-winning series Scientific American Frontiers for eleven years and founded the Alan Alda Center for Communicating Science at Stony Brook University. Alda is the author of two previous bestselling books, Never Have Your Dog Stuffed: And Other Things I’ve Learned and Things I Overheard While Talking To Myself.