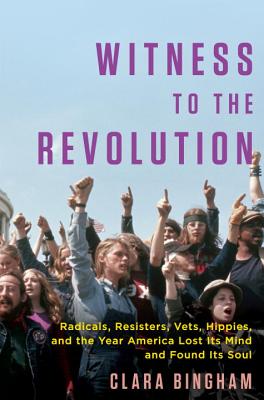 The electrifying story of the turbulent year when the sixties ended and America teetered on the edge of revolution NAMED ONE OF THE BEST BOOKS OF THE YEAR BY THE ST. LOUIS POST-DISPATCH As the 1960s drew to a close, the United States was coming apart at the seams. From August 1969 to August 1970, the nation witnessed nine thousand protests and eighty-four acts of arson or bombings at schools across the country. It was the year of the My Lai massacre investigation, the Cambodia invasion, Woodstock, and the Moratorium to End the War. The American death toll in Vietnam was approaching fifty thousand, and the ascendant counterculture was challenging nearly every aspect of American society. Witness to the Revolution, Clara Bingham's unique oral history of that tumultuous time, unveils anew that moment when America careened to the brink of a civil war at home, as it fought a long, futile war abroad. Woven together from one hundred original interviews, Witness to the Revolution provides a firsthand narrative of that period of upheaval in the words of those closest to the action--the activists, organizers, radicals, and resisters who manned the barricades of what Students for a Democratic Society leader Tom Hayden called "the Great Refusal." We meet Bill Ayers and Bernardine Dohrn of the Weather Underground; Daniel Ellsberg, the former Defense Department employee who released the Pentagon Papers; feminist theorist Robin Morgan; actor and activist Jane Fonda; and many others whose powerful personal stories capture the essence of an era. We witness how the killing of four students at Kent State turned a straitlaced social worker into a hippie, how the civil rights movement gave birth to the women's movement, and how opposition to the war in Vietnam turned college students into prisoners, veterans into peace marchers, and intellectuals into bombers. With lessons that can be applied to our time, Witness to the Revolution is more than just a record of the death throes of the Age of Aquarius. Today, when America is once again enmeshed in racial turmoil, extended wars overseas, and distrust of the government, the insights contained in this book are more relevant than ever. Praise for Witness to the Revolution "Especially for younger generations who didn't live through it, Witness to the Revolution is a valuable and entertaining primer on a moment in American history the likes of which we may never see again."--Bryan Burrough, The Wall Street Journal "A rich tapestry of a volatile period in American history."--Time "A gripping oral history of the centrifugal social forces tearing America apart at the end of the '60s . . . This is rousing reportage from the front lines of US history."--O: The Oprah Magazine "The familiar voices and the unfamiliar ones are woven together with documents to make this a surprisingly powerful and moving book."--New York Times Book Review " An] Enthralling and brilliant chronology of the period between August 1969 and September 1970."--Buffalo News " Bingham] captures the essence of these fourteen months through the words of movement organizers, vets, students, draft resisters, journalists, musicians, government agents, writers, and others. . . . This oral history will enable readers to see that era in a new light and with fresh sympathy for the motivations of those involved. While Bingham's is one of many retrospective looks at that period, it is one of the most immediate and personal."--Booklist

Clara Bingham is the author of Class Action: The Landmark Case That Changed Sexual Harassment Law (with Laura Leedy Gansler) and Women on the Hill: Challenging the Culture of Congress. She is a former Newsweek White House correspondent, and her writing has appeared in Vanity Fair, Vogue, Harper's Bazaar, Talk, The Washington Monthly, Ms., and other publications. Bingham produced the 2011 documentary The Last Mountain. She lives in Manhattan and Brooklyn with her husband, three children, and three stepchildren.
Loading...
or
Not Currently Available for Direct Purchase