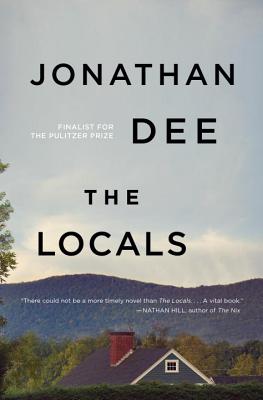 “Summons up a small American town at precisely the right moment in our history . . . a bold, vital, and view-expanding novel.”—George Saunders

A rural working-class New England town elects as its mayor a New York hedge fund millionaire in this inspired novel for our times—fiction in the tradition of Jonathan Franzen and Jennifer Egan.

Mark Firth is a contractor and home restorer in Howland, Massachusetts, who feels opportunity passing his family by. After being swindled by a financial advisor, what future can Mark promise his wife, Karen, and their young daughter, Haley? He finds himself envying the wealthy weekenders in his community whose houses sit empty all winter.

Philip Hadi used to be one of these people. But in the nervous days after 9/11 he flees New York and hires Mark to turn his Howland home into a year-round “secure location” from which he can manage billions of dollars of other people’s money. The collision of these two men’s very different worlds—rural vs. urban, middle class vs. wealthy—is the engine of Jonathan Dee’s powerful new novel.

Inspired by Hadi, Mark looks around for a surefire investment: the mid-decade housing boom. Over Karen’s objections, and teaming up with his troubled brother, Gerry, Mark starts buying up local property with cheap debt. Then the town’s first selectman dies suddenly, and Hadi volunteers for office. He soon begins subtly transforming Howland in his image—with unexpected results for Mark and his extended family.

Here are the dramas of twenty-first-century America—rising inequality, working class decline, a new authoritarianism—played out in the classic setting of some of our greatest novels: the small town. The Locals is that rare work of fiction capable of capturing a fraught American moment in real time.

Praise for The Locals

Praise For The Locals: A Novel…

“Captivating . . . [Dee’s] knowing gaze and elegant writing work well throughout The Locals, which is infused with a sense of desperation and dread. His characters are vivid, and the emotions raw.”—USA Today

“A steady, intelligent probing of family ties and sibling rivalry and themes that illuminate how we live now—inequality and status envy, individualism and community, the high life and the good life.”—Newsday

“The residents of a small town in the Berkshires have their world overturned by a billionaire in their midst. . . . [The Locals] plays both as political allegory and kaleidoscopic character study. An absorbing panorama of small-town life and a study of democracy in miniature.”—Kirkus Reviews (starred review)

“Good old social novels are hard to come by these days, great ones harder still. Leave it to [Jonathan] Dee to fill the void with a book that’s not only great but so frighteningly timely that the reader will be forced to wonder how he managed to compose it before the last election cycle.”—Booklist (starred review)

“Engrossing . . . His blue-collar characters, each of them pursuing the American Dream, are vividly developed, and his insights into how they think about the government (ineffective and corrupt) and their rights as citizens (ignored, trampled) are timely. . . . [Dee] handles the plot with admirable skill, finding empathy for his bewildered characters. He creates tension as a reckoning day arrives, and strikes the perfect ending note.”—Publishers Weekly (starred review)

“The Locals is a bold, vital, and view-expanding novel that thrills technically and emotionally. Jonathan Dee, big-hearted and masterly, summons up a small American town at precisely the right moment in our history, using his signature gifts (fairness, poetic precision in the language, affection for all) to cast light over a dark time—to suggest the root cause of our political problems, but also a way forward.”—George Saunders, New York Times bestselling author of Lincoln in the Bardo

“In this moving study of how the housing bubble’s burst sets a small town’s citizens against each other, Jonathan Dee tells a must-read story for our age. Class struggle, tyranny, America’s disillusionment after 9/11—The Locals creates a delicately drawn world impossible to forget.”—Mary Karr, New York Times bestselling author of The Liar’s Club and Lit

“There could not be a more timely novel than The Locals. It examines the American self and American selfishness from 9/11 until today. Jonathan Dee has given us a master class in empathy and compassion, a vital book.”—Nathan Hill, author of The Nix

“Blackly comic, effortlessly authoritative, The Locals is almost criminal in its perceptiveness about the screwed state of the American union. Jonathan Dee is a modern American master.”—Joseph O’Neill, author of Netherland and The Dog

Jonathan Dee is the author of six previous novels, most recently A Thousand Pardons. His novel The Privileges was a finalist for the 2010 Pulitzer Prize and winner of the 2011 Prix Fitzgerald and the St. Francis College Literary Prize. A former contributing writer for The New York Times Magazine, a senior editor of The Paris Review, and a National Magazine Award–nominated literary critic for Harper’s, he has received fellowships from the National Endowment for the Arts and the Guggenheim Foundation. He lives in Syracuse, New York.
Loading...
or
Not Currently Available for Direct Purchase