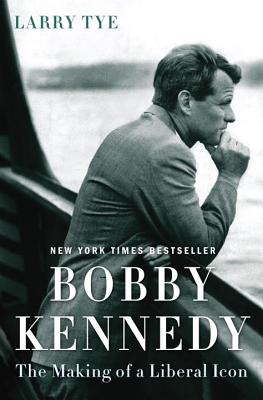 The Making of a Liberal Icon

"A multilayered, inspiring portrait of RFK . . . the] most in-depth look at an extraordinary figure whose transformational story shaped America."--Joe Scarborough, The Washington Post NEW YORK TIMES BESTSELLER - Soon to be a Hulu original series starring Chris Pine. Larry Tye appears on CNN's American Dynasties: The Kennedys. "We are in Larry Tye's debt for bringing back to life the young presidential candidate who . . . almost half a century ago, instilled hope for the future in angry, fearful Americans."--David Nasaw, The New York Times Book Review Bare-knuckle operative, cynical White House insider, romantic visionary--Robert F. Kennedy was all of these things at one time or another, and each of these aspects of his personality emerges in the pages of this powerful and perceptive biography. History remembers RFK as a racial healer, a tribune for the poor, and the last progressive knight of a bygone era of American politics. But Kennedy's enshrinement in the liberal pantheon was actually the final stage of a journey that began with his service as counsel to the red-baiting senator Joseph McCarthy. In Bobby Kennedy, Larry Tye peels away layers of myth and misconception to capture the full arc of his subject's life. Tye draws on unpublished memoirs, unreleased government files, and fifty-eight boxes of papers that had been under lock and key for forty years. He conducted hundreds of interviews with RFK intimates, many of whom have never spoken publicly, including Bobby's widow, Ethel, and his sister, Jean. Tye's determination to sift through the tangle of often contradictory opinions means that Bobby Kennedy will stand as the definitive biography about the most complex and controversial member of the Kennedy family. Praise for Bobby Kennedy "A compelling story of how idealism can be cultivated and liberalism learned . . . Tye does an exemplary job of capturing not just the chronology of Bobby's life, but also the sense of him as a person."--Los Angeles Review of Books "Captures RFK's rise and fall with straightforward prose bolstered by impressive research."--USA Today " Tye] has a keen gift for narrative storytelling and an ability to depict his subject with almost novelistic emotional detail."--Michiko Kakutani, The New York Times "Nuanced and thorough . . . RFK's] vision echoes through the decades."--The Economist

Larry Tye has been an award-winning journalist at The Boston Globe and a Nieman Fellow at Harvard University. He now runs a Boston-based training program for medical journalists. He is the author of the New York Times bestseller Satchel, as well as Superman, The Father of Spin, Home Lands, and Rising from the Rails, and co-author, with Kitty Dukakis, of Shock. He lives in Massachusetts.