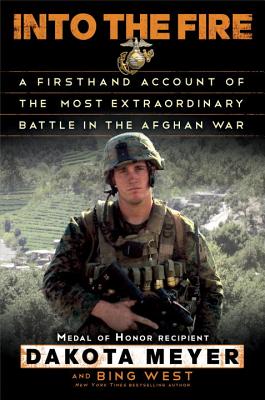 “The story of what Dakota did . . . will be told for generations.”—President Barack Obama, from remarks given at Meyer’s Medal of Honor ceremony


In the fall of 2009, Taliban insurgents ambushed a patrol of Afghan soldiers and Marine advisors in a mountain village called Ganjigal. Firing from entrenched positions, the enemy was positioned to wipe out one hundred men who were pinned down and were repeatedly refused artillery support. Ordered to remain behind with the vehicles, twenty-one year-old Marine corporal Dakota Meyer disobeyed orders and attacked to rescue his comrades.

With a brave driver at the wheel, Meyer stood in the gun turret exposed to withering fire, rallying Afghan troops to follow. Over the course of the five hours, he charged into the valley time and again. Employing a variety of machine guns, rifles, grenade launchers, and even a rock, Meyer repeatedly repulsed enemy attackers, carried wounded Afghan soldiers to safety, and provided cover for dozens of others to escape—supreme acts of valor and determination. In the end, Meyer and four stalwart comrades—an Army captain, an Afghan sergeant major, and two Marines—cleared the battlefield and came to grips with a tragedy they knew could have been avoided. For his actions on that day, Meyer became the first living Marine in three decades to be awarded the Medal of Honor.

Into the Fire tells the full story of the chaotic battle of Ganjigal for the first time,  in a compelling, human way that reveals it as a microcosm of our recent wars. Meyer takes us from his upbringing on a farm in Kentucky, through his Marine and sniper training, onto the battlefield, and into the vexed aftermath of his harrowing exploits in a battle that has become the stuff of legend.

Investigations ensued, even as he was pitched back into battle alongside U.S. Army soldiers who embraced him as a fellow grunt. When it was over, he returned to the States to confront living with the loss of his closest friends. This is a tale of American values and upbringing, of stunning heroism, and of adjusting to loss and to civilian life.

We see it all through Meyer’s eyes, bullet by bullet, with raw honesty in telling of both the errors that resulted in tragedy and the resolve of American soldiers, U.S. Marines, and Afghan soldiers who’d been abandoned and faced certain death.

Meticulously researched and thrillingly told, with nonstop pace and vivid detail, Into the Fire is the unvarnished story of a modern American hero.

“A story of men at their best and at their worst . . . leaves you gaping in admiration at Medal of Honor winner Dakota Meyer’s courage.”—National Review

“A great contribution to the discussion of an agonizingly complex subject.”—The Virginian-Pilot

Praise For Into the Fire: A Firsthand Account of the Most Extraordinary Battle in the Afghan War…

“A story of men at their best and at their worst . . . leaves you gaping in admiration at Medal of Honor winner Dakota Meyer’s courage.”—National Review

“A great contribution to the discussion of an agonizingly complex subject.”—The Virginian-Pilot

“Into the Fire is a deeply compelling tale of valor and duty.  Dakota Meyer will not identify as a hero, but he will, I think, accept the title warrior.  Dakota's storytelling is precise and, for a Medal of Honor recipient, touchingly humble.  With deft prose he drops us smack in the middle of one of the most heinous small unit firefights of the current wars.  His insights into military tactics and politics in a war zone are sharp and uncompromising and work as a primer on infantry war fighting for the uninitiated.  Dakota was a magnificent marine and he is now an equally magnificent chronicler of warfare and the small group of people who do today's fighting for America.”—Anthony Swofford, author of Jarhead

“The story of what Dakota did . . . will be told for generations.”—President Barack Obama, from remarks given at Meyer’s Medal of Honor ceremony

“Sergeant Meyer embodies all that is good about our nation’s Corps of Marines. . . . [His] heroic actions . . . will forever be etched in our Corps’ rich legacy of courage and valor.”—General James F. Amos, Commandant of the Marine Corps

Dakota Meyer was born and raised in Columbia, Kentucky, and enlisted in the United States Marine Corps in 2006. A school-trained sniper and highly skilled infantryman, Corporal Meyer deployed to Iraq in 2007 and to Afghanistan in 2009. In 2011, he was awarded the Congressional Medal of Honor for his unyielding courage in the battle of Ganjigal. He now competes at charity events in skeet and rifle competitions. He also speaks frequently at schools and veterans' events to raise awareness of our military and remains dedicated to the causes of our veterans. For the families of fallen troops, he has raised over one million dollars.

Bing West, a Marine combat veteran, served as an assistant secretary of defense in the Reagan administration. He has been on hundreds of patrols in Vietnam, Iraq, and Afghanistan. A nationally acclaimed war correspondent, he is the author of "The Village; No True Glory: A Frontline Account of the Battle for Fallujah; The Strongest Tribe: War, Politics, and the Endgame in Iraq; "and" The Wrong War: Grit, Strategy, and the Way Out of Afghanistan. "A member of the Council on Foreign Relations, West has received the Marine Corps Heritage Foundation award, the Colby Award for military nonfiction, the Veterans of Foreign Wars News Media Award, and the Marine Corps University Foundation's Russell Leadership Award. He lives with his wife, Betsy, in Newport, Rhode Island.
Loading...
or
Not Currently Available for Direct Purchase