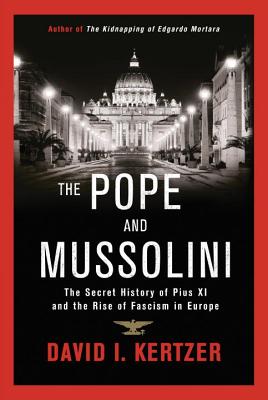 The Pope and Mussolini

From National Book Award finalist David I. Kertzer comes the gripping story of Pope Pius XI's secret relations with Italian dictator Benito Mussolini. This groundbreaking work, based on seven years of research in the Vatican and Fascist archives, including reports from Mussolini's spies inside the highest levels of the Church, will forever change our understanding of the Vatican's role in the rise of Fascism in Europe.


The Pope and Mussolini tells the story of two men who came to power in 1922, and together changed the course of twentieth-century history. In most respects, they could not have been more different. One was scholarly and devout, the other thuggish and profane. Yet Pius XI and "Il Duce" had many things in common. They shared a distrust of democracy and a visceral hatred of Communism. Both were prone to sudden fits of temper and were fiercely protective of the prerogatives of their office. ("We have many interests to protect," the Pope declared, soon after Mussolini seized control of the government in 1922.) Each relied on the other to consolidate his power and achieve his political goals. In a challenge to the conventional history of this period, in which a heroic Church does battle with the Fascist regime, Kertzer shows how Pius XI played a crucial role in making Mussolini's dictatorship possible and keeping him in power. In exchange for Vatican support, Mussolini restored many of the privileges the Church had lost and gave in to the pope's demands that the police enforce Catholic morality. Yet in the last years of his life--as the Italian dictator grew ever closer to Hitler--the pontiff's faith in this treacherous bargain started to waver. With his health failing, he began to lash out at the Duce and threatened to denounce Mussolini's anti-Semitic racial laws before it was too late. Horrified by the threat to the Church-Fascist alliance, the Vatican's inner circle, including the future Pope Pius XII, struggled to restrain the headstrong pope from destroying a partnership that had served both the Church and the dictator for many years. The Pope and Mussolini brims with memorable portraits of the men who helped enable the reign of Fascism in Italy: Father Pietro Tacchi Venturi, Pius's personal emissary to the dictator, a wily anti-Semite known as Mussolini's Rasputin; Victor Emmanuel III, the king of Italy, an object of widespread derision who lacked the stature--literally and figuratively--to stand up to the domineering Duce; and Cardinal Secretary of State Eugenio Pacelli, whose political skills and ambition made him Mussolini's most powerful ally inside the Vatican, and positioned him to succeed the pontiff as the controversial Pius XII, whose actions during World War II would be subject for debate for decades to come. With the recent opening of the Vatican archives covering Pius XI's papacy, the full story of the Pope's complex relationship with his Fascist partner can finally be told. Vivid, dramatic, with surprises at every turn, The Pope and Mussolini is history writ large and with the lightning hand of truth. NAMED ONE OF THE BEST BOOKS OF THE YEAR BY SAN FRANCISCO CHRONICLE

"Kertzer has an eye for a story, an ear for the right word, and an instinct for human tragedy. This is a sophisticated blockbuster."--Joseph J. Ellis, Pulitzer Prize-winning author of Revolutionary Summer


Praise For The Pope and Mussolini: The Secret History of Pius XI and the Rise of Fascism in Europe…

“Much more attention has been given to the Vatican’s compromises and complicity with Hitler, but Kertzer tells a fascinating and tragic story of its self-interested support for Mussolini when he was vulnerable early on.”—The New Yorker

“A compelling case that the Catholic Church should pay greater penance for its support of Mussolini and the rise of fascism . . . The Pope and Mussolini matches rigorous scholarship with a fair yet forceful prose voice. It is an impressive work of history.”—The Daily Beast

“A remarkable achievement in bringing to light, through researches wide in scope and profound in depth, a previously hidden history.”—Commentary

“Compelling . . . Kertzer charts his own course not only by virtue of the depth of his archival research and analysis, but also by virtue of his engaging prose.”—America: The National Catholic Review

“The papacy of Pius XI remained essentially a foil for discussing his successor. Kertzer’s excellent volume will change all of that. . . . From the outset of his new book, Kertzer deftly reconstructs the parallel lives of Achille Ratti, who became Pius XI, and of Benito Mussolini, both men whose beginnings do not point to the historic role that they began to play in 1922. The narration unfolds along the separate political, ideological, and institutional backgrounds of the Pope’s and Duce’s careers and brings up in fascinating detail the issues on which their interests converged and clashed. . . . Kertzer’s essential book reveals a window on this sordid history—a window that for a long time was shuttered, but will not be obscured anymore.”—The New Republic

“Gripping storytelling . . . a book whose narrative strength is as impressive as its moral subtlety . . . Kertzer has uncovered a fascinating tale of two irascible—and often irrational—potentates, and gives us an account of some murky intellectual finagling, and an often startling investigation of the exercise of power.”—The Guardian

“At once sweeping and nuanced . . . required reading for anyone with an interest in the Roman Catholic Church and early twentieth-century European history.”—St. Louis Post-Dispatch

“David Kertzer has an eye for a story, an ear for the right word, and an instinct for human tragedy. They all come together in The Pope and Mussolini to document, with meticulous scholarship and novelistic flair, the complicity between Pius XI and the Fascist leader in creating an unholy alliance between the Vatican and a totalitarian government rooted in corruption and brutality. This is a sophisticated blockbuster.”—Joseph J. Ellis, Pulitzer Prize–winning author of Revolutionary Summer

“A capstone on David Kertzer’s already crucial work, The Pope and Mussolini carefully and eloquently advances the painful but necessary truth of Vatican failure to meet its greatest moral test. This is history for the sake of justice.”—James Carroll, National Book Award–winning author of Constantine’s Sword

“The Pope and Mussolini is a riveting story from start to finish, full of startling, documented detail, and nobody is better prepared to tell it than David Kertzer.”—Jack Miles, Pulitzer Prize–winning author of God: A Biography

“Wholly deserving—even demanding—the adjectives ‘groundbreaking,’ ‘courageous,’ and ‘captivating,’ The Pope and Mussolini decisively challenges the received narrative about Pius XI and the Fascist leader. The relationship, in short, was one not of hostility but of mutual dependence. David Kertzer’s conclusions are unflinchingly and conclusively proven, thanks to his profound and thorough research, scholarly authority, and narrative panache. This is a meticulously researched and crafted book, exquisitely written, fresh, mesmerizing, and enlightening.”—Kevin Madigan, Winn Professor of Ecclesiastical History, Harvard University

“The Pope and Mussolini tells the story of two remarkable men, Achille Ratti, Pope Pius XI, and Benito Mussolini, Duce of Fascism. Both demanded absolute obedience. Those who knew the pope called him ‘a block of granite’ and ‘cold as marble.’ The highest prelates trembled in his presence. Mussolini, swollen with his success, became ‘a statue’ who listened to no one. David Kertzer tells their stories in counterpoint as they could never have been told before. The opening of the Vatican archives in 2006 and the discovery of a vast archive of Mussolini’s spies in the hierarchy of the Vatican provide Kertzer staggering new evidence, and his wonderful portraits of everybody involved give this book the fascination of a great novel.”—Jonathan Steinberg, Walter H. Annenberg Professor of Modern European History, University of Pennsylvania, and New York Times bestselling author of Bismarck

“David Kertzer, who pored through the recently opened Vatican secret files gives, us a ghastly history of the poisonous alliance between a weakened Vatican and an ambitious Mussolini. The Pope’s blessing gave Il Duce the needed credibility to take Italy and the Italian people where he wanted them to go. In exchange for that approval, the Fascists provided the Church with its only perceived bulwark against the forces of Communism and the modern age. Enter Hitler. I can imagine Machiavelli overseeing the manipulations on both sides and saying either ‘Well played’ or ‘You go too far’ or ‘Beware.’ David Kertzer has written a harrowing portrait of a ghastly union whose only by-product was the nightmare of World War II.”—John Guare, award-winning playwright and author of Six Degrees of Separation

“A thoroughly engrossing story with an ever-changing cast of fascinating characters . . . Like a couple in a loveless marriage, entered into for all the wrong reasons, Pius XI and Mussolini could not get free of each other. Mussolini hated priests. Pius XI swallowed his scruples about the Duce’s growing megalomania. Each reckoned that he had much to gain from the other. Beneath their endless squabbling about precedence, their continual posturing, Pius and Mussolini undermined and ultimately squandered the happiness of the millions who trusted them. Kertzer has written the definitive book on this tragic history.”—Richard S. Levy, professor of history, the University of Illinois at Chicago, and co-editor of Antisemitism: A History

“The author spares no toes in his crushing of the Church’s ‘comforting narrative’ around its relationship with Mussolini’s Fascist regime. . . . Kertzer is unflinching and relentless in his exposure of the Vatican’s shocking actions. . . . Deeply troubling revelations around Vatican collaboration with evil.”—Kirkus Reviews (starred review)

“Kertzer unravels the relationship between two of twentieth-century Europe’s most important political figures and does so in an accessible style that makes for a fast-paced must-read.”—Publishers Weekly (starred review)

David I. Kertzer is the Paul Dupee, Jr. University Professor of Social Science and professor of anthropology and Italian studies at Brown University, where he served as provost from 2006 to 2011. He is the author of twelve books, including The Pope and Mussolini, winner of the 2015 Pulitzer Prize for Biography and the American Historical Association prize for best book on Italian history, and The Kidnapping of Edgardo Mortara, a finalist for the National Book Award in 1997. He has twice been awarded the Marraro Prize from the Society for Italian Historical Studies for the best book on Italian history and in 2005 was elected to membership in the American Association of Arts and Sciences. He and his wife, Susan, live in Providence, Rhode Island.