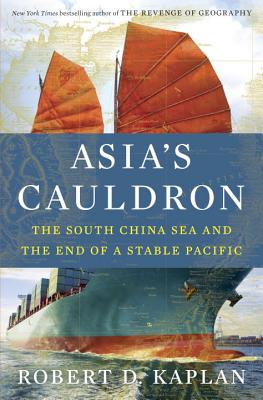 The South China Sea and the End of a Stable Pacific

NAMED ONE OF THE BEST BOOKS OF THE YEAR BY"FINANCIAL TIMES
"
From Robert D. Kaplan, named one of the world's Top 100 Global Thinkers by "Foreign Policy" magazine, comes a penetrating look at the volatile region that will dominate the future of geopolitical conflict.
Over the last decade, the center of world power has been quietly shifting from Europe to Asia. With oil reserves of several billion barrels, an estimated nine hundred trillion cubic feet of natural gas, and several centuries worth of competing territorial claims, the South China Sea in particular is a simmering pot of potential conflict. The underreported military buildup in the area where the Western Pacific meets the Indian Ocean means that it will likely be a hinge point for global war and peace for the foreseeable future.
In "Asia's Cauldron," Robert D. Kaplan offers up a vivid snapshot of the nations surrounding the South China Sea, the conflicts brewing in the region at the dawn of the twenty-first century, and their implications for global peace and stability. One of the world's most perceptive foreign policy experts, Kaplan interprets America's interests in Asia in the context of an increasingly assertive China. He explains how the region's unique geography fosters the growth of navies but also impedes aggression. And he draws a striking parallel between China's quest for hegemony in the South China Sea and the United States imperial adventure in the Caribbean more than a century ago.
To understand the future of conflict in East Asia, Kaplan argues, one must understand the goals and motivations of its leaders and its people. Part travelogue, part geopolitical primer, "Asia's Cauldron" takes us on a journey through the region's boom cities and ramshackle slums: from Vietnam, where the superfueled capitalism of the erstwhile colonial capital, Saigon, inspires the geostrategic pretensions of the official seat of government in Hanoi, to Malaysia, where a unique mix of authoritarian Islam and Western-style consumerism creates quite possibly the ultimate postmodern society; and from Singapore, whose benevolent autocracy helped foster an economic miracle, to the Philippines, where a different brand of authoritarianism under Ferdinand Marcos led not to economic growth but to decades of corruption and crime.
At a time when every day's news seems to contain some new story large or small that directly relates to conflicts over the South China Sea, "Asia's Cauldron" is an indispensable guide to a corner of the globe that will affect all of our lives for years to come.
Praise for "Asia's Cauldron"
"Asia's Cauldron" is a short book with a powerful thesis, and it stands out for its clarity and good sense. . . . If you are doing business in China, traveling in Southeast Asia or just obsessing about geopolitics, you will want to read it. "The New York Times Book Review"
Kaplan has established himself as one of our most consequential geopolitical thinkers. . . . "Asia's Cauldron"] is part treatise on geopolitics, part travel narrative. Indeed, he writes in the tradition of the great travel writers. "The Weekly Standard"
Kaplan's fascinating book is a welcome challenge to the pessimists who see only trouble in China's rise and the hawks who view it as malign. "The Economist"
Muscular, deeply knowledgeable . . . Kaplan is an ultra-realist who] takes a non-moralistic stance on questions of power and diplomacy. "Financial Times.

Praise For Asia's Cauldron: The South China Sea and the End of a Stable Pacific…

“Asia’s Cauldron is a perfect summation of the present turbulent moment in history, when the World War II security structure is beginning a rapid transformation. Kaplan engages the striking possibilities of where the current confrontation between China and Japan could lead, and underscores the point that this is a lot more significant than a simple border dispute.”—Paul Bracken, Yale University, author of The Second Nuclear Age

“Master global strategist Robert D. Kaplan turns his gaze to the bubbling heat of the South China Sea in his latest tour de force. Asia’s Cauldron deconstructs the extreme volatility of this enormous, dangerous, and vital maritime space. By thoughtfully pulling apart the complex tangle of argument and accusation among the nations of the region, he helps provide a well-charted course for the United States in this most turbulent geopolitical zone of the twenty-first-century.”—Admiral James Stavridis, United States Navy (Ret.), dean of the Fletcher School at Tufts University and Supreme Allied Commander of the North Atlantic Treaty Organization, 2009–2013

“Robert D. Kaplan has done it again: he has written an engaging—but disturbing—book about an area of the world that to most Americans is a distant rimland. Yet in an era of emerging Sino-American competition, the larger Southeast Asian region could well become the explosive cynosure of new great-power rivalries. Asia’s Cauldron is a wonderful and captivating guide that illumines the myriad colliding forces that will shape the future of the Indo-Pacific.”—Ashley J. Tellis, senior associate, Carnegie Endowment for International Peace

“A riveting, multitextured look at an underexamined region of the world and, perhaps, at the ‘anxious, complicated world’ of the future.”—Booklist

Robert D. Kaplan is the bestselling author of sixteen books on foreign affairs and travel translated into many languages, including "Asia s Cauldron, The Revenge of Geography, Monsoon, The Coming Anarchy, "and" Balkan Ghosts." He is a senior fellow at the Center for a New American Security and a contributing editor at "The Atlantic, " where his work has appeared for three decades. He was chief geopolitical analyst at Stratfor, a visiting professor at the United States Naval Academy, and a member of the Pentagon s Defense Policy Board. "Foreign Policy" magazine has twice named him one of the world s Top 100 Global Thinkers."
Loading...
or
Not Currently Available for Direct Purchase