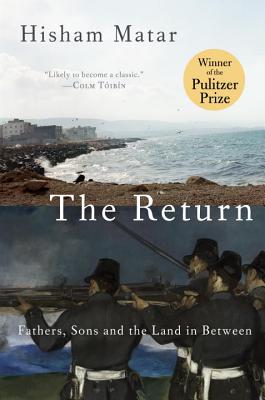 Fathers, Sons and the Land in Between

WINNER OF THE PULITZER PRIZE • The acclaimed memoir about fathers and sons, a legacy of loss, and, ultimately, healing—one of The New York Times Book Review’s ten best books of the year, winner of the PEN/Jean Stein Book Award, and a finalist for the National Book Critics Circle Award and the Los Angeles Times Book Prize

When Hisham Matar was a nineteen-year-old university student in England, his father went missing under mysterious circumstances. Hisham would never see him again, but he never gave up hope that his father might still be alive. Twenty-two years later, he returned to his native Libya in search of the truth behind his father’s disappearance. The Return is the story of what he found there.

The Pulitzer Prize citation hailed The Return as “a first-person elegy for home and father.” Transforming his personal quest for answers into a brilliantly told universal tale of hope and resilience, Matar has given us an unforgettable work with a powerful human question at its core: How does one go on living in the face of unthinkable loss?

NAMED ONE OF THE BEST BOOKS OF THE YEAR BY
Michiko Kakutani, The New York Times • The Washington Post • The Guardian • Financial Times

“A tale of mighty love, loyalty and courage. It simply must be read.”—The Spectator (U.K.)

“Wise and agonizing and thrilling to read.”—Zadie Smith

“[An] eloquent memoir . . . at once a suspenseful detective story about a writer investigating his father’s fate . . . and a son’s efforts to come to terms with his father’s ghost, who has haunted more than half his life by his absence.”—Michiko Kakutani, The New York Times

“This outstanding book . . . roves back and forth in time with a freedom that conceals the intricate precision of its art.”—The Wall Street Journal

“Truly remarkable . . . a book with a profound faith in the consolations of storytelling . . . a testament to [Matar’s] father, his family and his country.”—The Daily Telegraph (U.K.)

“The Return is a riveting book about love and hope, but it is also a moving meditation on grief and loss. . . . Likely to become a classic.”—Colm Tóibín

“A moving, unflinching memoir of a family torn apart.”—Kazuo Ishiguro, The Guardian

“Beautiful . . . The Return, for all the questions it cannot answer, leaves a deep emotional imprint.”—Newsday

“A masterful memoir, a searing meditation on loss, exile, grief, guilt, belonging, and above all, family. It is, as well, a study of the shaping—and breaking—of the bonds between fathers and sons. . . . This is writing of the highest quality.”—The Sunday Times (U.K.)

Praise For The Return (Pulitzer Prize Winner): Fathers, Sons and the Land in Between…

“[Hisham Matar] writes with both a novelist’s eye for physical and emotional detail, and a reporter’s tactile sense of place and time. The prose is precise, economical, chiseled; the narrative elliptical, almost musical. . . . The Return is, at once, a suspenseful detective story about a writer investigating his father’s fate at the hands of a brutal dictatorship, and a son’s efforts to come to terms with his father’s ghost, who has haunted more than half his life by his absence.”—Michiko Kakutani, The New York Times

“It seems unfair to call Hisham Matar’s extraordinary new book a memoir, since it is so many other things besides: a reflection on exile and the consolations of art, an analysis of authoritarianism, a family history, a portrait of a country in the throes of a revolution, and an impassioned work of mourning. . . . For all its terrible human drama . . . the most impressive thing about The Return is that it also tells a common story, the story of sons everywhere who have lost their fathers, as all sons eventually must.”—Robyn Creswell, The New York Times Book Review

“[The Return] roves back and forth in time with a freedom that conceals the intricate precision of its art. One of the greatest achievements of this outstanding book is a narrative design that keeps us hungry for new information even when we suspect exactly what has happened. . . . Mr. Matar is not a wonderful writer because his father disappeared or because his homeland is a mess: He is a brilliant narrative architect and prose stylist, his pared-down approach and measured pace a striking complement to the emotional tumult of his material.”—The Wall Street Journal

“One comes away from this beautiful book feeling a sense of loss for the Libya that Matar and his father, brother, mother, uncles and cousins all fought for or dreamed of. . . . The effect of the family’s attachments is less sentimental than defiant. And although the author does not want to give Libya anything more, he has, in this profound work of witnessing and grief, given it something indeed: a testimony that, even if shaped by the brutal state, has not ultimately been erased by it. The Return, for all the questions it cannot answer, leaves a deep emotional imprint.”—Newsday

“A moving, unflinching memoir of a family torn apart by the savage realities of today’s Middle East. The crushing of hopes raised by the Arab spring—at both the personal and national levels—is conveyed all the more powerfully because Matar’s anger remains controlled, his belief in humanity undimmed.”—Kazuo Ishiguro, “The Best Summer Books,” The Guardian

“Matar’s prose is both spare and soaring, transporting in the way a great painting or musical composition can be. His words are selected with careful intention; his sentences are at once poetic and conversational, his themes particular and universal. . . . Matar’s evocative writing and his early traumas call to mind Vladimir Nabokov . . . but where Nabokov’s loss of country and father were public and final . . . Matar’s are frustratingly indefinite. . . . There is no record. There is no grave. Only this elegy by a son who, through his eloquence, defies the men who wanted to erase his father and gifts him with a kind of immortality.”—The Washington Post

“The Return is not about one family. It’s the story of Libyan opposition and resistance, although the Matar family shapes the storyline. . . . The book describes how, cruelly, even the dimmest ray of hope can keep the families of the disappeared from accepting the possibility of their loss.”—The Christian Science Monitor

“In this triptych of beloved country, father, and the art that survives, Matar moves us with the force of his compassion, grace, and fury. . . . The Return is one of the most notable memoirs of our generation, by one of our most elegant living writers. In his testimony to the tenacity of the human spirit, Hisham Matar has shown us what language can do.”—Los Angeles Review of Books

“An utterly riveting account of a devoted son’s quest to learn the fate—not necessarily the truth—of Jaballa Matar.”—The Boston Globe

“A moving new memoir that is as much a commentary on the power of art as it is a harrowing tale of life under totalitarian rule . . . Even in the face of unspeakable injustice, family and stories possess the power to help one endure.”—Minneapolis Star Tribune

“Few trips could be as emotionally freighted as the one taken by Libyan-raised novelist Hisham Matar in his thriller-like memoir, The Return: Fathers, Sons, and the Land in Between, about the post-Qaddafi search for his dissident father—and his own deeply ambivalent sense of homecoming.”—Vogue

“He writes eloquent and precise prose, and his deep inquiry into his father’s imprisonment and absence, and the conflicting details about his death, blend with consideration of Libya’s politics and history, to create a deeply resonant memoir.”—National Book Review

“A masterful memoir, a searing meditation on loss, exile, grief, guilt, belonging, and above all, family. It is, as well, a study of the shaping—and breaking—of the bonds between fathers and sons. . . . This is writing of the highest quality.”—Sunday Times (London)

“At times almost unbearably moving . . . Hisham Matar is an observer and listener of enormous subtlety and sensitivity, and he writes English prose as cleanly and clearly as it can be written. This is a story of terrible deeds, but also a tale of mighty love, loyalty and courage. It simply must be read.”—The Spectator

“A truly remarkable book. From the raw materials of his anger, his suffering, and his guilt, Matar has built a testament to his father, his family and his country. . . . It is a book with a profound faith in the consolations of storytelling. . . . The Return is an act of defiant remembering”—Daily Telegraph (UK)

“Out of his protracted torment Matar has forged a memoir that in its nuance and nobility bears unforgettable witness to love, to courage and to humanity. The Return is also a subtle and nimble work of art. It shifts elegantly between past and present, between dialogue and soliloquy, between urgent, even suspenseful action, and probing meditations on exile, grief and loss.”—Financial Times (UK)

“Mr. Matar’s questions, however, go well beyond politics. This beautifully written memoir deals with the nature of family, the emotions of exile and the ties that link the present with the past—in particular the son with his father, Jaballa Matar.”—The Economist

“[Matar] reveals a suspense novelist’s seasoned instincts . . . A beautifully written, harrowing story of a son’s search for his father and how the impact of inexplicable loss can be unrelenting while the strength of family and cultural ties can ultimately sustain.”—Kirkus (Starred Review)

“A magnificent memoir of exile and loss. Hisham Matar writes Libya’s contemporary history with a Proustian sensibility and the intellect of Al-Jahiz. A timeless read.”—Rawi Hage

“The Return is a personal memoir, concerned with the kidnapping and disappearance of the writer’s father at the hands of the Qaddafi regime. It is wise and agonizing and thrilling to read.”—Zadie Smith

“What a brilliant book. Hisham Matar has the quality all historians—of the world and the self—most need: He knows how to stand back and let the past speak. In chronicling his quest for his father, his manner is fastidious, even detached, but his anger is raw and unreconciled; through his narrative art he bodies out the shape of loss and gives a universality to his very particular experience of desolation. The Return reads as easily as a thriller, but is a story that will stick: A person is lost, but gravity and resonance remain.”—Hilary Mantel

“The Return is a riveting book about love and hope, but it is also a moving meditation on grief and loss. It draws a memorable portrait of a family in exile and manages also to explore the politics of Libya with subtlety and steely intelligence. It is a quest for the truth in a dark time, constructed with a novelist's skill, written in tones that are both precise and passionate. It is likely to become a classic.”—Colm Tóibín

“A triumph of art over tyranny, structurally thrilling, intensely moving, The Return is a treasure for the ages.”—Peter Carey

“The Return is tremendously powerful. Although it filled me with rage again and again, I never lost sight of Matar’s beautiful intelligence as he tried to get to the heart of the mystery. I am so very grateful he has written this book.”—Nadeem Aslam

Born in New York City to Libyan parents, Hisham Matar spent his childhood in Tripoli and Cairo and has lived most of his adult life in London. His debut novel, In the Country of Men, was shortlisted for the Man Booker Prize and the National Book Critics Circle Award, and won numerous international prizes, including the Royal Society of Literature Ondaatje Prize, a Commonwealth First Book Award, the Premio Flaiano, and the Premio Gregor von Rezzori. His second novel, Anatomy of a Disappearance, published in 2011, was named one of the best books of the year by The Guardian and the Chicago Tribune. His work has been translated into twenty-nine languages. He lives in London and New York.
Loading...
or
Not Currently Available for Direct Purchase