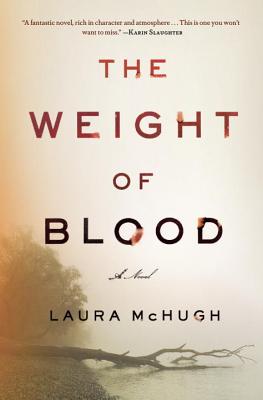 The Weight of Blood

“This is a literary thriller that will keep you reading well into the night. Two girls, Lila and Cheri, disappear a generation apart. Lucy, Lila's grown daughter and Cheri's friend, soon realizes there is a connection between the two that runs deep in her family. The Ozark Mountain landscape is the perfect setting for this powerful and haunting mystery. Fans of Gillian Flynn will not be disappointed in this gritty coming-of-age story that tests the limits of family loyalty.”
— Amanda Skelton, Union Avenue Books, Knoxville, TN
View the List

For fans of Gillian Flynn, Scott Smith, and Daniel Woodrell comes a gripping, suspenseful novel about two mysterious disappearances a generation apart.
INTERNATIONAL THRILLER WRITERS AWARD WINNER AND BARRY AWARD NOMINEE FOR BEST FIRST NOVEL NAMED ONE OF THE BEST BOOKS OF THE YEAR BY "BOOKPAGE"
The town of Henbane sits deep in the Ozark Mountains. Folks there still whisper about Lucy Dane's mother, a bewitching stranger who appeared long enough to marry Carl Dane and then vanished when Lucy was just a child. Now on the brink of adulthood, Lucy experiences another loss when her friend Cheri disappears and is then found murdered, her body placed on display for all to see. Lucy's family has deep roots in the Ozarks, part of a community that is fiercely protective of its own. Yet despite her close ties to the land, and despite her family's influence, Lucy darkly beautiful as her mother was is always thought of by those around her as her mother's daughter. When Cheri disappears, Lucy is haunted by the two lost girls the mother she never knew and the friend she couldn t save and sets out with the help of a local boy, Daniel, to uncover the mystery behind Cheri's death.
What Lucy discovers is a secret that pervades the secluded Missouri hills, and beyond that horrific revelation is a more personal one concerning what happened to her mother more than a decade earlier.
"The Weight of Blood" is an urgent look at the dark side of a bucolic landscape beyond the arm of the law, where a person can easily disappear without a trace. Laura McHugh proves herself a masterly storyteller who has created a harsh and tangled terrain as alive and unforgettable as the characters who inhabit it. Her mesmerizing debut is a compelling exploration of the meaning of family: the sacrifices we make, the secrets we keep, and the lengths to which we will go to protect the ones we love.
Praise for "The Weight of Blood"
An] expertly crafted thriller. "Entertainment Weekly, " The Must List
Haunting . . . a] riveting debut. "Los Angeles Times"
Laura McHugh's atmospheric debut . . . conjures a menacingly beautiful Ozark setting and a nest of poisonous family secrets reminiscent of Daniel Woodrell's "Winter's Bone." " Vogue"
Fantastic . . . a mile-a-minute thriller. "The Dallas Morning News"
""
Gripping . . . Her prose will not only keep readers turning the pages but also paints a real and believable portrait of the connections, alliances, and sacrifices that underpin rural, small-town life. . . . Strongly recommended for readers who enjoy thrillers by authors such as Laura Lippman and Tana French. " Library Journal "(starred review)
The sinister tone builds relentlessly. " The Plain Dealer"
""
Rich in character and atmosphere . . . This is one you won t want to miss. Karin Slaughter
Daniel Woodrell better watch his back. . . . "Weight of Blood" is a tense, taut novel and a truly remarkable debut. . . . A suspenseful thrill ride that satisfies in all the right ways. "BookPage.


Praise For The Weight of Blood…

“With her riveting debut, The Weight of Blood, Laura McHugh makes a strong bid at cementing a new tradition of regional crime fiction while keeping tourism low in the Ozarks. . . . [A] powerful sense of place is the anchor of The Weight of Blood. The well-drawn townspeople and oppressive, dread-soaked atmosphere sprout from the soil of Henbane. . . . The prose is strong, with evocative paint strokes in all the right places. McHugh is an artful, efficient writer who tells her story in vicious blows. . . . McHugh has crafted a sharp, haunting tale of blood in the Ozarks, as substantial as it is pleasurable to read.”—Los Angeles Times

“A fantastic novel, rich in character and atmosphere . . . This is one you won’t want to miss.”—Karin Slaughter, author of Unseen

“A suspenseful thrill ride that satisfies in all the right ways . . . Daniel Woodrell had better watch his back. . . . The Weight of Blood is a tense, taut novel and a truly remarkable debut.”—BookPage

“Laura McHugh’s vivid and enthralling The Weight of Blood centers on a mother and daughter in a seemingly benign yet deeply horrifying small town. It kept me on the edge of my seat from the first page to the last.”—Vanessa Diffenbaugh, author of The Language of Flowers

“The Weight of Blood pulled me in and wouldn’t let go. What starts as Lucy’s coming-of-age story becomes a chilling tale about the price of secrets. As the menace deepens, so does the tension. Laura McHugh has written a terrific novel.”—Meg Gardiner, Edgar Award–winning author of The Shadow Tracer

“McHugh’s debut is as lush and evocative as its Ozark setting, with luminous prose and characters you can’t help rooting for, even as the mystery surrounding them intensifies and the odds against them grow more and more harrowing. I couldn’t put it down.”—Carla Buckley, author of The Deepest Secret

“In this clever, multilayered debut, McHugh deftly explores the past of an Ozark Mountain family . . . with plenty to hide and the ruthlessness to keep their secrets hidden. . . . This is an outstanding first novel, replete with suspense, crisp dialogue, and vivid Ozarks color and atmosphere.”—Publishers Weekly

“Debut novelist McHugh comes out swinging with this gripping tale set in the Ozarks of Missouri. . . . Her prose will not only keep readers turning the pages but also paints a real and believable portrait of the connections, alliances, and sacrifices that underpin rural, small-town life in Henbane.”—Library Journal (starred review)

“In this riveting debut, Laura McHugh weaves together the stories of two women, separated by a generation, who each reveal pieces of a story that gains momentum and power as its shape becomes clear. This novel will keep you up all night.”—Christina Baker Kline, author of Orphan Train

“Once I picked up Laura McHugh’s The Weight of Blood, I couldn’t put it down. I kept turning pages long into the night, bewitched by the enchanting Ozark landscape and the haunting murder mystery at its heart. The Weight of Blood is the kind of novel that leaves the reader breathless and wanting more.”—Amy Greene, author of Bloodroot

“An elegant time bomb of a novel, a coming-of age story that holds you captive from the first sentence and doesn’t let go of you after the last.”—Tracy Guzeman, author of The Gravity of Birds

“[A] suspenseful novel, with a barn burner of a plot . . . McHugh shows herself to be a compelling writer intimately familiar with rural poverty and small-town weirdness.”—Booklist

Laura McHugh lives in Columbia, Missouri, with her husband and children. "The Weight of Blood" is her first novel.
Loading...
or
Not Currently Available for Direct Purchase