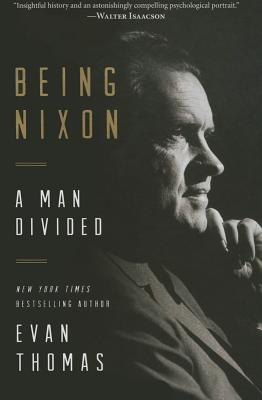 NAMED ONE OF THE TEN BEST NONFICTION BOOKS OF THE YEAR BY "TIME "AND ONE OF THE BEST BOOKS OF THE YEAR BY "RICHMOND TIMES-DISPATCH" What was it really like to be Richard Nixon? Evan Thomas tackles this fascinating question by peeling back the layers of a man driven by a poignant mix of optimism and fear. Walter Isaacson, author of"Steve Jobs
"
Evan Thomas delivers the best single-volume biography of Richard Nixon to date, a radical, unique portrait of a complicated figure who was both determinedly optimistic and tragically flawed. The "New York Times" bestselling author of "Ike's Bluff "and" Sea of Thunder, "Thomas brings new life to one of American history's most infamous, paradoxical, and enigmatic politicians, dispensing with myths to achieve an intimate and nuanced look at the actual man.
What drove a painfully shy outcast in elite Washington society a man so self-conscious he refused to make eye contact during meetings to pursue power and public office? How did a president so attuned to the American political id that he won reelection in a historic landslide lack the self-awareness to recognize the gaping character flaws that would drive him from office and forever taint his legacy?
In "Being Nixon, " Evan Thomas peels away the layers of the complex, confounding figure who became America's thirty-seventh president. The son of devout Quakers, Richard Nixon (not unlike his rival John F. Kennedy) grew up in the shadow of an older, favored brother and thrived on conflict and opposition. Through high school and college, in the navy and in politics, he was constantly leading crusades and fighting off enemies real and imagined. As maudlin as he was Machiavellian, Nixon possessed the plainspoken eloquence to reduce American television audiences to tears with his career-saving Checkers speech; meanwhile, his darker half hatched schemes designed to take down his political foes, earning him the notorious nickname Tricky Dick.
Drawing on a wide range of historical accounts, Thomas reveals the contradictions of a leader whose vision and foresight led him to achieve detente with the Soviet Union and reestablish relations with communist China, but whose underhanded political tactics tainted his reputation long before the Watergate scandal. One of the principal architects of the modern Republican Party and its silent majority of disaffected whites and conservative ex-Dixiecrats, Nixon was also deemed a liberal in some quarters for his efforts to desegregate Southern schools, create the Environmental Protection Agency, and end the draft.
A deeply insightful character study as well as a brilliant political biography, "Being Nixon" offers a surprising look at a man capable of great bravery and extraordinary deviousness a balanced portrait of a president too often reduced to caricature.
Praise for" Being Nixon"
A biography of eloquence and breadth . . . No single volume about Nixon's long and interesting life could be so comprehensive. " Chicago Tribune"
Terrifically engaging . . . a fair, insightful and highly entertaining portrait. "The Wall Street Journal"
Thomas has a fine eye for the telling quote and the funny vignette, and his style is eminently readable. "The New York Times Book Review"
Thomas proves an amiable and fair-minded tour guide. "The Boston Globe"
Sharp and briskly written. " Time"
A measured, concise, and important American biography. Michael Beschloss, author of "Presidential Courage.

Evan Thomas is the author of nine books: "The Wise Men" (with Walter Isaacson), "The Man to See, The Very Best Men, Robert Kennedy, John Paul Jones, Sea of Thunder, The War Lovers, " "Ike s Bluff, "and" Being Nixon." "John Paul Jones "and" Sea of Thunder" were "New York Times" bestsellers. Thomas was a writer, correspondent, and editor for thirty-three years at "Time "and" Newsweek, "including ten years (1986 96) as Washington bureau chief at "Newsweek, " where, at the time of his retirement in 2010, he was editor at large. He wrote more than one hundred cover stories and in 1999 won a National Magazine Award. He wrote "Newsweek" s fifty-thousand-word election specials in 1996, 2000, 2004 (winner of a National Magazine Award), and 2008. He has appeared on many TV and radio talk shows, including "Meet the Press "and" The Colbert Report, " and has been a guest on PBS s "Charlie Rose" more than forty times. The author of dozens of book reviews for "The New York Times "and" The Washington Post, " Thomas has taught writing and journalism at Harvard and Princeton, where, from 2007 to 2014, he was Ferris Professor of Journalism."
or
Not Currently Available for Direct Purchase
Copyright © 2020 American Booksellers Association