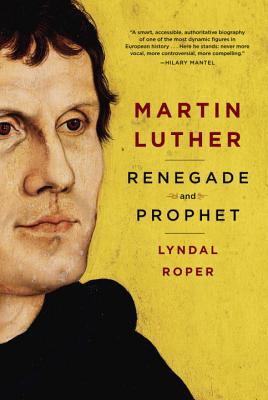 From “one of the best of the new [Martin Luther] biographers” (The New Yorker), a portrait of the complicated founding father of the Protestant Reformation, whose intellectual assault on Catholicism transformed Christianity and changed the course of world history.

On October 31, 1517, so the story goes, a shy monk named Martin Luther nailed a piece of paper to the door of the Castle Church in the university town of Wittenberg. The ideas contained in these Ninety-five Theses, which boldly challenged the Catholic Church, spread like wildfire. Within two months, they were known all over Germany. So powerful were Martin Luther’s broadsides against papal authority that they polarized a continent and tore apart the very foundation of Western Christendom. Luther’s ideas inspired upheavals whose consequences we live with today.

But who was the man behind the Ninety-five Theses? Lyndal Roper’s magisterial new biography goes beyond Luther’s theology to investigate the inner life of the religious reformer who has been called “the last medieval man and the first modern one.” Here is a full-blooded portrait of a revolutionary thinker who was, at his core, deeply flawed and full of contradictions. Luther was a brilliant writer whose biblical translations had a lasting impact on the German language. Yet he was also a strident fundamentalist whose scathing rhetorical attacks threatened to alienate those he might persuade. He had a colorful, even impish personality, and when he left the monastery to get married (“to spite the Devil,” he explained), he wooed and wed an ex-nun. But he had an ugly side too. When German peasants rose up against the nobility, Luther urged the aristocracy to slaughter them. He was a ferocious anti-Semite and a virulent misogynist, even as he argued for liberated human sexuality within marriage.

A distinguished historian of early modern Europe, Lyndal Roper looks deep inside the heart of this singularly complex figure. The force of Luther’s personality, she argues, had enormous historical effects—both good and ill. By bringing us closer than ever to the man himself, she opens up a new vision of the Reformation and the world it created and draws a fully three-dimensional portrait of its founder.

Lyndal Roper is the first woman to hold the prestigious Regius Chair at Oxford University. She is one of the most respected scholars of early modern history on both sides of the Atlantic. She is the winner of the Gerda Henkel Prize (2016), and her previous books include Witch Craze: Terror and Fantasy in Baroque Germany; Oedipus and the Devil: Witchcraft, Religion, and Sexuality in Early Modern Europe; The Witch in the Western Imagination; and The Holy Household: Women and Morals in Reformation Augsburg.

“This is a smart, accessible, authoritative biography of one of the most dynamic figures in European history. Lyndal Roper writes with clarity and discernment, so that nothing stands between the reader and her grimly fascinating subject; she grounds the reformer, situating him psychically as well as geographically in a Germany she describes as vividly as if we lived there: mining towns as well as lecture halls, courts as well as cathedrals. She creates a context for a man who arouses both admiration and horror in the modern reader. Here he stands: never more vocal, more controversial, more compelling.”—Hilary Mantel

“It is inevitable that the anniversary of the Reformation would bring forth a flood of new publications. Martin Luther: Renegade and Prophet is undoubtedly one of the best and most substantial. . . . This biography offers a fresh and deeply illuminating study of the man who somewhat reluctantly divided a continent. What emerges is a work of impeccable scholarship and painstaking fairmindedness. . . . A richly satisfying book [that] offers some penetrating insights.”—Andrew Pettegree, The New York Times Book Review

“One of the best of the new [Martin Luther] biographers.”—Joan Acocella, The New Yorker

“A fine achievement, deeply researched and fluently written, and it brings its difficult and cantankerous subject to life as no other biography has. . . . A fine account of the man, both his good and bad sides, rooted in a profound knowledge of the social milieu from which he came and through which he worked: a magnificent study of one of history’s most compelling and divisive figures.”—Richard Evans, The Wall Street Journal

“Roper’s biography is a demonstration not only of her skill as a historian but also as a storyteller. . . . Extremely readable and will find a welcome audience among history enthusiasts.”—Publishers Weekly (starred review)

“Rich with detail, scholarly but accessible, Roper’s great biography of this critical, courageous, confrontational, and controversial figure provides a perfect work for the five-hundredth anniversary of his Ninety-Five Theses.”—Library Journal (starred review)

“Arguably the most consequential figure in Western history between Jesus and Napoleon, Luther fully merits the grace and perceptiveness of Roper’s fine book.”—Booklist (starred review)

“[Luther] leaps off the page in a vivid array of colours. . . . The work of one of the most imaginative and pioneering historians of our generation.”—The Guardian

“Roper, Regius professor of history at Oxford University, has an extraordinary talent for making complex theological issues not just clear but entertaining. Luther jumps from these pages with immense vitality, as if his exploits occurred last week. Theological history often seems monochrome. This is Luther in colour.”—The Times