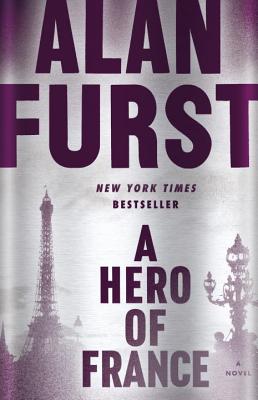 A Hero of France (Hardcover)

NEW YORK TIMES BESTSELLER - From the bestselling master espionage writer, hailed by Vince Flynn as "the best in the business," comes a riveting novel about the French Resistance in Nazi-occupied Paris. NAMED ONE OF THE BEST BOOKS OF THE YEAR BY THE WASHINGTON POST 1941. The City of Light is dark and silent at night. But in Paris and in the farmhouses, barns, and churches of the French countryside, small groups of ordinary men and women are determined to take down the occupying forces of Adolf Hitler. Mathieu, a leader of the French Resistance, leads one such cell, helping downed British airmen escape back to England. Alan Furst's suspenseful, fast-paced thriller captures this dangerous time as no one ever has before. He brings Paris and occupied France to life, along with courageous citizens who outmaneuver collaborators, informers, blackmailers, and spies, risking everything to fulfill perilous clandestine missions. Aiding Mathieu as part of his covert network are Lisette, a seventeen-year-old student and courier; Max de Lyon, an arms dealer turned nightclub owner; Chantal, a woman of class and confidence; Daniel, a Jewish teacher fueled by revenge; Joelle, who falls in love with Mathieu; and Annemarie, a willful aristocrat with deep roots in France, and a desire to act. As the German military police heighten surveillance, Mathieu and his team face a new threat, dispatched by the Reich to destroy them all. Shot through with the author's trademark fine writing, breathtaking suspense, and intense scenes of seduction and passion, Alan Furst's A Hero of France is at once one of the finest novels written about the French Resistance and the most gripping novel yet by the living master of the spy thriller. Praise for Alan Furst "Furst never stops astounding me."--Tom Hanks "Suspenseful and sophisticated . . . No espionage author, it seems, is better at summoning the shifting moods and emotional atmosphere of Europe before the start of World War II than Alan Furst."--The Wall Street Journal "Though set in a specific place and time, Furst's books are like Chopin's nocturnes: timeless, transcendent, universal. One does not so much read them as fall under their spell."--Los Angeles Times " Furst] remains at the top of his game."--The New York Times "A grandmaster of the historical espionage genre."--The Boston Globe

Alan Furst, widely recognized as the master of the historical spy novel, is the author of Midnight in Europe, Mission to Paris, and many other bestsellers. Born in New York, he lived for many years in Paris, and now lives on Long Island.
or
Not Currently Available for Direct Purchase
Copyright © 2020 American Booksellers Association