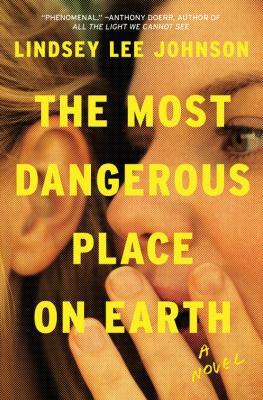 The Most Dangerous Place on Earth

“If only we had had the wisdom back in high school, to see behind the facades of the kids who intimidated us, fascinated us, irritated us, and disgusted us -- and to understand how the ways we collided with each other and with life would play out for us. Johnson's literary superpower is to plunge us into such a school and make us feel it all again as if we are there -- only this time with all of the wisdom we lacked previously.”
— Nina Barrett (M), Bookends & Beginnings, Evanston, IL
View the List

An unforgettable cast of characters is unleashed into a realm known for its cruelty—the American high school—in this captivating debut novel.

The wealthy enclaves north of San Francisco are not the paradise they appear to be, and nobody knows this better than the students of a local high school. Despite being raised with all the opportunities money can buy, these vulnerable kids are navigating a treacherous adolescence in which every action, every rumor, every feeling, is potentially postable, shareable, viral.

Lindsey Lee Johnson’s kaleidoscopic narrative exposes at every turn the real human beings beneath the high school stereotypes. Abigail Cress is ticking off the boxes toward the Ivy League when she makes the first impulsive decision of her life: entering into an inappropriate relationship with a teacher. Dave Chu, who knows himself at heart to be a typical B student, takes desperate measures to live up to his parents’ crushing expectations. Emma Fleed, a gifted dancer, balances rigorous rehearsals with wild weekends. Damon Flintov returns from a stint at rehab looking to prove that he’s not an irredeemable screwup. And Calista Broderick, once part of the popular crowd, chooses, for reasons of her own, to become a hippie outcast.

Into this complicated web, an idealistic young English teacher arrives from a poorer, scruffier part of California. Molly Nicoll strives to connect with her students—without understanding the middle school tragedy that played out online and has continued to reverberate in different ways for all of them.

Written with the rare talent capable of turning teenage drama into urgent, adult fiction, The Most Dangerous Place on Earth makes vivid a modern adolescence lived in the gleam of the virtual, but rich with sorrow, passion, and humanity.

Praise for The Most Dangerous Place on Earth

“[A] piercing debut . . . Johnson proves herself a master of the coming-of-age story.”—The Boston Globe

“Readers may find themselves so swept up in this enthralling novel that they finish it in a single sitting.”—Publishers Weekly (starred review)

Praise For The Most Dangerous Place on Earth: A Novel…

“The characters in The Most Dangerous Place on Earth, Lindsey Lee Johnson’s alarming, compelling and coolly funny debut novel about the goings-on in and out of a high school in Marin County, Calif., spend most of their time spectacularly failing to see beneath one another’s surfaces. . . . Ms. Johnson’s characters are unpredictable, contradictory and many things at once, which make them particularly satisfying. . . . Here’s high school life in all its madness.”—Sarah Lyall, The New York Times

“Told through multiple perspectives, the novel offers a rich portrait of these characters’ experiences, laying bare their desires without demeaning the validity of their concerns. . . . [Lindsay Lee] Johnson proves herself a master of the coming-of-age story. . . . With a fearless compassion, Johnson artfully unwraps who these people truly are, as well as whom they claim to be.”—The Boston Globe

“In her stunning debut, Johnson . . . explores the fallout among a group of teens—an alpha girl turned stoner, a striving B student, an Ivy League wannabe—who prove, in the end, less entitled than simply empty and searching. An eye-opener.”—People (Book of the Week)

“Hard to put down. Johnson’s novel possesses a propulsive quality. . . . I read this book in one, long sitting. . . .  It is a particularly poignant message for today as we, as a nation, grapple with rising inequality and widespread questioning of the viability of the American dream. We ask, is it dead? But Johnson is asking a different question, a good one. She asks whether there is something fundamentally askew with this bedrock American idea. Her book seems to say, yes, there is something rotten amid the uneven splendor. Just look at the kids who should be the happiest on earth.”—Chicago Tribune

“Johnson manages to intensify the perils of adolescence in the same vein as Curtis Sittenfeld’s Prep and Celeste Ng’s Everything I Never Told You.”—San Francisco Magazine

“These characters seem like typical teenagers, but beneath the surface is a dark incident that makes this chilling portrait of growing up in the digital age pretty unputdownable.”—PureWow

“A fascinating, often comic, and ultimately heartbreaking read . . . Like Curtis Sittenfeld’s Prep, Lindsey Lee Johnson’s The Most Dangerous Place on Earth ekes engaging drama out of an upper-crust high school’s social politics. . . . In its most insightful moments, The Most Dangerous Place on Earth also reminds us just how moving a teen drama can be.”—The Dallas Morning News

“The characters in Lindsey Lee Johnson’s debut novel affected me in a way I can’t remember feeling since I binge-watched all five seasons of Friday Night Lights. . . . You’ll walk away feeling like you could revisit a hallway drama armed with bulletproof perspective.”—Glamour

“Engrossing . . . affluent students become embroiled in high-stakes drama with their teachers and, of course, each other.”—InStyle

“In Johnson’s excellent debut, her sharp storytelling conveys an authentic sense of the perils of adolescence. . . . Johnson allows these dramas to unfold through various shifting perspectives. . . . She keeps the action brisk and deepens readers’ investment, culminating in a high school party that goes wrong. Readers may find themselves so swept up in this enthralling novel that they finish it in a single sitting.”—Publishers Weekly (starred review)

“In sharp and assured prose, roving among characters, Lindsey Lee Johnson plumbs the terrifying depths of a half-dozen ultraprivileged California high school kids. I read The Most Dangerous Place on Earth in two chilling gulps. It’s a phenomenal first book, a compassionate Less Than Zero for the digital age.”—Anthony Doerr, # 1 New York Times bestselling author of All the Light We Cannot See

“The Most Dangerous Place on Earth is a deftly composed mosaic of adolescence in the modern age, frightening and compelling in its honesty: a terrific debut, and one that I didn’t want to set down.”—Julia Pierpont, New York Times bestselling author of Among the Ten Thousand Things

“Lindsey Lee Johnson’s gripping debut novel leads us into the moral freefall of a group of privileged Marin County students following a dark incident in their shared past. Beautifully inhabited and written in supple, confident prose, this novel of adolescent violence and vulnerability is a knockout!”—Janet Fitch, author of Paint It Black and White Oleander

“An astonishing debut novel, The Most Dangerous Place on Earth plunges the reader into the fraught power dynamics between (and among) high school teachers and students with both nuance and fearlessness. With a stunning constellation of characters’ voices and a fiercely compelling story, it’s impossible to put down, or to forget.”—Megan Abbott, author of You Will Know Me and Dare Me

“In her superb first novel, Lindsey Lee Johnson deftly illuminates a certain strain of privileged American adolescence and the existential minefield these kids are forced to navigate. Elegantly constructed and beautifully written, The Most Dangerous Place on Earth reads like Jane Austen for this anxious era.”—Seth Greenland, author of I Regret Everything and The Angry Buddhist

Lindsey Lee Johnson holds a master of professional writing degree from the University of Southern California and a BA in English from the University of California at Davis. She has served as a tutor and mentor at a private learning center, where her focus has been teaching writing to teenagers. Born and raised in Marin County, she now lives with her husband in Los Angeles.
Loading...
or
Not Currently Available for Direct Purchase