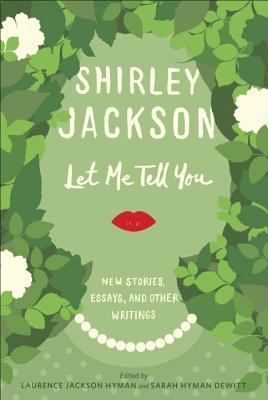 Let Me Tell You

New Stories, Essays, and Other Writings

NAMED ONE OF THE BEST BOOKS OF THE YEAR BY NPR From the renowned author of The Lottery and The Haunting of Hill House, a spectacular new volume of previously unpublished and uncollected stories, essays, and other writings.
Features Family Treasures, nominated for the Edgar Award for Best Short Story
Shirley Jackson is one of the most important American writers of the last hundred years. Since her death in 1965, her place in the landscape of twentieth-century fiction has grown only more exalted.
As we approach the centenary of her birth comes this astonishing compilation of fifty-six pieces more than forty of which have never been published before. Two of Jackson's children co-edited this volume, culling through the vast archives of their mother's papers at the Library of Congress, selecting only the very best for inclusion.
Let Me Tell You brings together the deliciously eerie short stories Jackson is best known for, along with frank, inspiring lectures on writing; comic essays about her large, boisterous family; and whimsical drawings. Jackson's landscape here is most frequently domestic: dinner parties and bridge, household budgets and homeward-bound commutes, children's games and neighborly gossip. But this familiar setting is also her most subversive: She wields humor, terror, and the uncanny to explore the real challenges of marriage, parenting, and community the pressure of social norms, the veins of distrust in love, the constant lack of time and space.
For the first time, this collection showcasesShirley Jackson's radically different modes of writing side by side. Together they show her to be a magnificent storyteller, a sharp, sly humorist, and a powerful feminist.
This volume includes a Foreword by the celebrated literary critic and Jackson biographer Ruth Franklin.
Praise for Let Me Tell You
Stunning. O: The Oprah Magazine

Let us now at last celebrate dangerous women writers: how cheering to see justice done with this collection of] Shirley Jackson's heretofore unpublished works uniquely unsettling stories and ruthlessly barbed essays on domestic life. Vanity Fair
Feels like an uncanny dollhouse: Everything perfectly rendered, but something deliciously not quite right. NPR
There are . . . times in reading Jackson s] accounts of desperate women in their thirties slowly going crazy that she seems an American Jean Rhys, other times when she rivals even Flannery O Connor in her cool depictions of inhumanity and insidious cruelty, and still others when she matches Philip K. Dick at his most hallucinatory. At her best, though, she's just incomparable. The Washington Post
Offers insights into the vagaries of Jackson s] mind, which was ruminant and generous, accommodating such diverse figures as Dr. Seuss and Samuel Richardson. The New York Times Book Review

The best pieces clutch your throat, gently at first, and then with growing strength. . . . The whole collection has a timelessness. The Boston Globe
Jackson s] writing, both fiction and nonfiction, has such enduring power she brings out the darkness in life, the poltergeists shut into everyone's basement, and offers them up, bringing wit and even joy to the examination. USA Today

The closest we can get to sitting down and having a conversation with . . . one of the most original voices of her generation. The Huffington Post

Shirley Jackson was born in San Francisco on December 14, 1916. She first received wide critical acclaim for The Lottery, which was published in The New Yorker in 1948 and went on to become one of the most anthologized stories in American literature. She is the author of six novels, including The Haunting of Hill House and We Have Always Lived in the Castle; four collections of short stories and essays, including Just an Ordinary Day; and two family memoirs, Life Among the Savages and Raising Demons. For many years she lived in North Bennington, Vermont, with her husband, the renowned literary critic Stanley Edgar Hyman, and their four children. She died on August 8, 1965. Laurence Jackson Hyman, the eldest child of Shirley Jackson and Stanley Edgar Hyman, has spent most of his professional life in publishing: as writer, photographer, editor, art director, and publisher. He is the author, editor, or co-editor of dozens of books and monographs. Sarah Hyman DeWitt is the third child of Shirley Jackson and Stanley Edgar Hyman. She is a performer, folksinger, and artist. Ruth Franklin is a book critic and the author of A Thousand Darknesses, which was a finalist for the 2012 Sami Rohr Prize for Jewish Literature. She has written for many publications, including The New Republic, The New Yorker, The New York Review of Books, The New York Times Magazine, Bookforum, and Granta. She is at work on a biography of Shirley Jackson."
Loading...
or
Not Currently Available for Direct Purchase