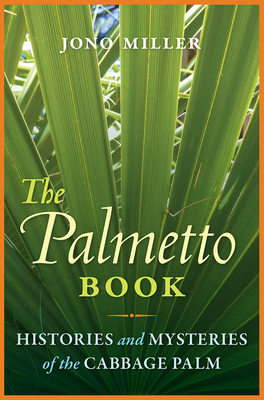 Histories and Mysteries of the Cabbage Palm

The natural and cultural history of an iconic plant

The palmetto, also known as the cabbage palm or Sabal palmetto, is an iconic part of the southeastern American landscape and the state tree of Florida and South Carolina. In The Palmetto Book, Jono Miller offers surprising facts and dispels common myths about an important native plant that remains largely misunderstood.

Miller answers basic questions such as: Are palms trees? Where did they grow historically? When should palmettos be pruned? What is swamp cabbage and how do you prepare it? Did Winslow Homer's watercolors of palmettos inadvertently document rising sea level? How can these plants be both flammable and fireproof? Based on historical research, Miller argues that cabbage palms can live for more than two centuries. The palmettos that were used to build Fort Moultrie at the start of the Revolutionary War thwarted a British attack on Charleston--and ended up on South Carolina's flag.

Delving into biology, Miller describes the anatomy of palm fronds and their crisscrossed leaf bases, called bootjacks. He traces the underground "saxophone" structure of the young plant's root system. He explores the importance of palmettos for many wildlife species, including Florida Scrub-Jays and honey bees. Miller also documents how palmettos can pose problems for native habitats, citrus groves, and home landscapes.

From Low Country sweetgrass baskets to Seminole chickees and an Elvis Presley movie set, the story of the cabbage palm touches on numerous dimensions of the natural and cultural history of the Southeast. Exploring both the past and present of this distinctive species, The Palmetto Book is a fascinating and enlightening journey.