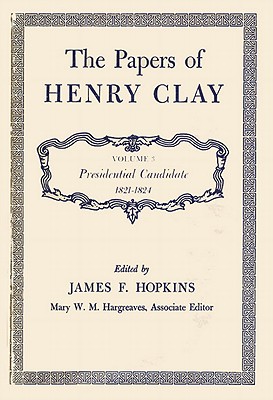 The Papers of Henry Clay, 3

This third volume in the ten-volume series covers the career of Henry Clay from the Second Session of the Sixteenth Congress, where he engineered the second Missouri Compromise, to the presidential election of 1824, when he found himself eliminated as a candidate.

Upon his return from Congress in 1821, Clay practiced law and interested himself in Transylvania University, among other things. Elected again to the House of Representatives and to the Speakership in the Eighteenth Congress, Clay resumed his leadership in national affairs; his concerns at this period were principally with the Monroe Doctrine, the Spanish and Greek revolutions, and internal improvements and the tariff.

A continuing thread in the volume is the presidential campaign of 1824. Clay's correspondence illustrates the changes in political techniques brought about by the emergence of the Jacksonian type of campaign. Sectionalism, already revealed as a danger to the Union, continued as an important issue. Clay's optimistic anticipation of his election of course proved incorrect, and the volume ends with Clay in the powerful but uncomfortable position of being able, by throwing his support to one of three candidates before the House of Representatives, to choose the next President of the United States.