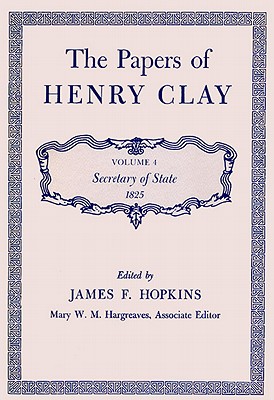 The Papers of Henry Clay, 4

This fourth volume in the ten-volume series covers the career of Henry Clay during his first year as Secretary of State in the cabinet of President John Quincy Adams.

Within a month after taking office, Henry Clay described the Department of State as "no bed of roses." Even though routine papers bearing his signature have been omitted by the editors, the 950 pages of documents included in this volume show that many duties filled Clay's days and nights. The evidence in autograph drafts and the meagerness of revision in the official documents indicate the need for major reconsideration of Clay's role in United States foreign relations during the presidency of John Quincy Adams.

The range of issues emerging in these papers is broad, and the duties were obviously more than the limited staff of the Department of State could satisfactorily perform. But if, as a result, the United States suffered a major diplomatic defeat during the British revision of trade regulations, Clay's instructions to the Panama mission marked him as a statesman of world stature.