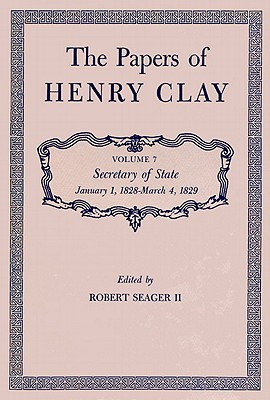 The Papers of Henry Clay, 7

The Papers of Henry Clay span the crucial first half of the nineteenth century in American history. Few men in his time were so intimately concerned with the formation of national policy, and few influenced so profoundly the growth of American political institutions.

Volume 7, the fourth and final of those dealing with Clay's role as secretary of state, carries the story of his career from January 1, 1828, to March 3, 1829. During these fourteen months, Clay and President John Quincy Adams strive unsuccessfully to solve a number of nagging diplomatic problems before leaving office. Among these are the northeast boundary controversy with Great Britain, the exclusion of American trade from the British West Indies, and the settlement of U.S. spoliation claims with France. Equally frustrating to Clay is the fact that the enormous amount of time and effort he has expended in Adams's reelection campaign has produced so little in return. To his genuine amazement and dismay, Andrew Jackson defeats Adams decisively.

The volume ends in March 1829 with Clay facing an uncertain future. Unsure whether he wants again to practice law, he contemplates instead the prospect of managing "Ashland," his Lexington estate. At the same time, convinced that the Jackson administration can only end in disaster, Clay's thoughts turn to running again for the White House in 1832. With this possibility in mind, the nation's ninth secretary of state leaves Washington for home.

Robert Seager II is professor of history at the University of Kentucky.
Loading...
or support indie stores by buying on