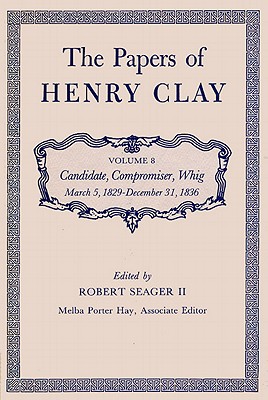 The Papers of Henry Clay, 8

Returning to Kentucky in the spring of 1829 after four years as secretary of state in the administration of John Quincy Adams, Henry Clay quickly regained the political dominance at home that would carry him to the U.S. Senate in 1831. Assuming leadership of the anti-Jackson forces, Senator Clay in 1832 mounted a spirited campaign for the presidency, advocating recharter of the national bank, high protective tariffs, and internal improvements, and alleging the administrative incompetence of Jackson and his cronies. Clay's defeat by the popular military hero was probably foreordained, but he emerged with sufficient national prestige to play the leading role in mediation of the nullification crisis of December 1832-March 1833. The battle over the constitutionality of the protective tariff, during which the words secession, invasion, and civil war were freely used, pitted Jackson and the power of the federal government against the states' rights politicians of South Carolina. Clay's masterful legislative compromise of 1833 defused a tense situation and brought him national applause as savior of the Union.

Continuing his efforts to form a political coalition strong enough to defeat the Jacksonians, Clay was successful in a Senate resolution to censure the president for unconstitutional exercise of power in removing government deposits from the Bank of the United States. But as the election of 1836 drew near it became evident that the emerging coalition could not defeat Democrat Martin Van Buren, Jackson's hand- picked candidate; as the Reign of Jackson drew to a close, Clay could only view the national scene with dismay.

Publication of this book was assisted by a grant from the National Endowment for the Humanities.

Robert Seager II is professor of history at the University of Kentucky.Melba Porter Hay is a specialist in the history of Kentucky.
Loading...
or support indie stores by buying on