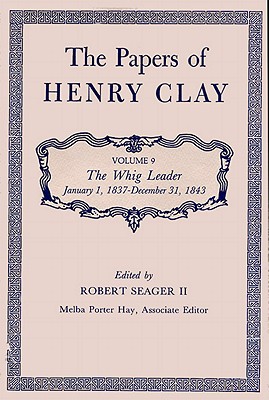 The Papers of Henry Clay, 9

The Papers of Henry Clay span the crucial first half of the nineteenth century in American history. Few men in his time were so intimately concerned with the formation of national policy, and few influenced so profoundly the growth of American political institutions.

The year 1837 found Henry Clay hard at work in a successful effort to organize and strengthen the new Whig party. In his attempt to provide for it an ideological core, he emphasized restoration of the Bank of the United States, distribution of the treasury surplus to the states, continued adherence to his Compromise Tariff Act of 1833, and federal funding of internal improvements. The achievement of these goals, Clay reasoned, would mitigate the severe impact of the Depression of 1837 and sweep the Whigs into the White House in 1840.

Soon after the election of 1836, Clay began running again for the presidency. By 1838 it was clear to him that he would have to come to grips politically with the long-muted slavery question. This he did in February 1839 in a Senate speech that was so proslavery, anti-abolitionist, and racially extremist that it cost him the Whig presidential nomination at the Harrisburg convention in December 1839. William Henry Harrison was nominated in his stead and won handily. But one month after his inauguration Harrison died and Vice President John Tyler, a states' rights Democrat turned Whig, was elevated to the presidency.

Senator Clay emerged from his disappointment at Harrisburg as the acknowledged leader of the Whig party and further unified it in a wide-ranging assault on the Tyler administration's refusal to support Whig principles. By the end of 1843 Tyler had been broken, the Whig party was Clay's to lead, and the Kentuckian was again in the presidential lists. Confident that 1844 would surely be his year, Clay unfortunately failed to see the formation and growth of the black cloud that was Texas annexation.

Robert Seager II is professor of history at the University of Kentucky.Melba Porter Hay is a specialist in the history of Kentucky.
Loading...
or support indie stores by buying on