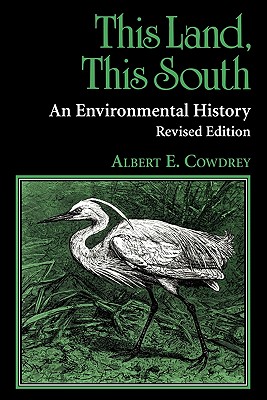 This Land, This South (New Perspectives on the South)

Here is the story of the long interaction between humans, land, and climate in the American South. It is a tale of exploitation and erosion, of destruction, disease, and defeat, but also of the persistent search for knowledge and wisdom. It is a story whose villains were also its victims and sometimes its heroes. Ancient forces created the southern landscape, but, as Albert E. Cowdrey shows, humankind from the time of earliest habitation has been at work reshaping it. The southern Indians, far from being the "natural ecologists" of myth, radically transformed their environment by hunting and burning. Such patterns were greatly accelerated by the arrival of Europeans, who viewed the land as a commodity to be exploited for immediate economic benefit. Their greed and ignorance took a heavy toll on the land and all those it supported. Climate, interacting with history, also played its part. The diseases brought to the New World from Europe and later from Africa found in the South a warm and hospitable abode, with devastating consequences for its human inhabitants. Until well into the twentieth century, endemic illnesses continually eroded human resources. Cowdrey documents not only the long decline but the painfully slow struggle to repair the damage of human folly. The eighteenth century saw widespread though ineffectual efforts to protect game and conserve the soil. In the nineteenth century the first hesitant steps were taken toward scientific flood control, forestry, wildlife protection, and improved medicine. In this century, the New Deal, the explosion in scientific knowledge, and the national environmental movement have spurred more rapid improvements. But the efforts to harness the South's great rivers, to save its wild species, and to avert serious environmental pollution have often had equivocal results. This Land, This South, first published in 1983, was the first book to explore the impact of humans on the southern landscape and its effect on them. In graceful and at times lyrical prose, Albert Cowdrey brings together a vast array of information. This important book, now revised and updated, should be read by every person concerned with the past, present, and future of the South.

Albert E. Cowdrey is a senior fellow at the Eisenhower Center of the University of New Orleans.
Loading...
or support indie stores by buying on