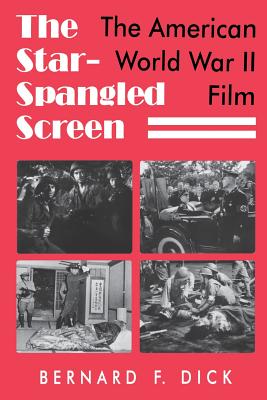 The American World War II film depicted a united America, a mythic America in which the average guy, the girl next door, the 4-F patriot, and the grieving mother were suddenly transformed into heroes and heroines, warriors and goddesses. The Star-Spangled Screen examines the historical accuracy -- or lack thereof -- of films about the Third Reich, the Resistance, and major military campaigns. Concerned primarily with the films of the war years, it also includes discussions of such postwar movies as Battleground (1949), Attack (1956), The Bridge on the River Kwai (1957), and Patton (1970). This revised edition includes a new afterword that covers more recent films, such as Sophie's Choice (1982), Biloxi Blues (1986), and Schindler's List (1993). The Star-Spangled Screen makes a major contribution to popular culture by recreating an era that, for all its tragedy, was one of the most creative in the history of American film.

Bernard F. Dick, professor of communications and English at Fairleigh Dickinson University, is the author of numerous books on film history, including Engulfed: the Death of Paramount Pictures and the Birth of Corporate Hollywood and Hal Wallis: Producer to the Stars.
Loading...
or support indie stores by buying on