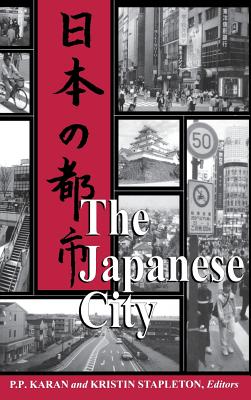 Japan is one of the most crowded countries on earth, with three-fourths of its population now living in cities. Tokyo is easily the most populous city on the planet. And yet, though closely packed, its citizens dwell together in relative peace. In America, inner-city violence -- often attributed in part to overcrowding -- is frequently emphasized as one of the great social problems of the day. What might we learn from Japan's situation that could be applied to our own as we approach the twenty-first century?

In this collection an interdisciplinary group of international scholars seek to understand and explain the process and characteristics shaping the modern Japanese city. With frequent comparisons to the American city, they consider such topics as urban landscapes, the quality of life in the suburbs, spatial mixing of social classes in the city, land use planning and control, environmental pollution, and images of the city in Japanese literature.

The only book on the subject, The Japanese City surveys the important literature and highlights the current issues in urban studies. The numerous photographs, maps, tables, and graphs, combined with the high quality of the contributions, offer a comprehensive look at the contemporary Japanese city.

P.P. Karan, professor of geography and chair of the Japan Studies Program, and Kristin Stapleton, assistant professor in the department of history, both teach at the University of Kentucky.
or support indie stores by buying on
Copyright © 2020 American Booksellers Association