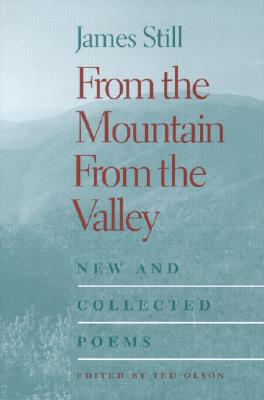 From the Mountain, from the Valley (Hardcover)

James Still first achieved national recognition in the 1930s as a poet. Although he is better known today as a writer of fiction, it is his poetry that many of his essential images, such as the "mighty river of earth," first found expression. Yet much of his poetry remains out of print or difficult to find.

From the Mountain, From the Valley collects all of Still's poems, including several never before published, and corrects editorial mistakes that crept into previous collections. The poems are presented in chronological order, allowing the reader to trace the evolution of Still's voice. Throughout, his language is fresh and vigorous and his insight profound. His respect for people and place never sounds sentimental or dated.

Ted Olson's introduction recounts Still's early literary career and explores the poetic origins of his acclaimed lyrical prose. Still himself has contributed the illuminating autobiographical essay "A Man Singing to Himself," which will appeal to every lover of his work.

James Still, the first poet laureate of Kentucky, recipient of two Guggenheim Fellowships and many other awards and honors, is the author of numerous works, including his masterful novel River of Earth.

Ted Olson, associate professor of Appalachian studies and English at East Tennessee State University, is the author of Blue Ridge Folklife and the editor of CrossRoads: A Southern Culture Annual.