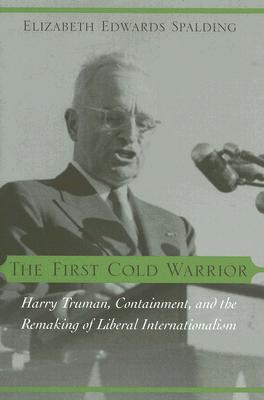 Harry Truman, Containment, and the Remaking of Liberal Internationalism

From the first days of his unexpected presidency in April 1945 through the landmark NSC 68 of 1950, Harry Truman was central to the formation of America's grand strategy during the Cold War and the subsequent remaking of U.S. foreign policy. Others are frequently associated with the terminology of and responses to the perceived global Communist threat after the Second World War: Walter Lippmann popularized the term "cold war," and George F. Kennan first used the word "containment" in a strategic sense. Although Kennan, Secretary of State Dean Acheson, and Secretary of Defense George C. Marshall have been seen as the most influential architects of American Cold War foreign policy, The First Cold Warrior draws on archives and other primary sources to demonstrate that Harry Truman was the key decision maker in the critical period between 1945 and 1950. In a significant reassessment of the thirty-third president and his political beliefs, Elizabeth Edwards Spalding contends that it was Truman himself who defined and articulated the theoretical underpinnings of containment. His practical leadership style was characterized by policies and institutions such as the Truman Doctrine, the Marshall Plan, NATO, the Berlin airlift, the Department of Defense, and the National Security Council. Part of Truman's unique approach -- shaped by his religious faith and dedication to anti-communism -- was to emphasize the importance of free peoples, democratic institutions, and sovereign nations. With these values, he fashioned a new liberal internationalism, distinct from both Woodrow Wilson's progressive internationalism and Franklin D. Roosevelt's liberal pragmatism, which still shapes our politics. Truman deserves greater credit for understanding the challenges of his time and for being America's first cold warrior. This reconsideration of Truman's overlooked statesmanship provides a model for interpreting the international crises facing the United States in this new era of ideological conflict.