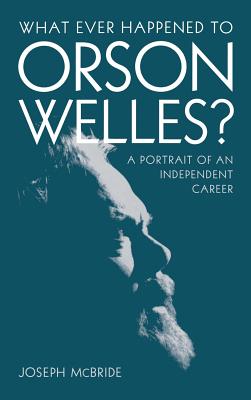 What Ever Happened to Orson Welles?

At the age of twenty-five, Orson Welles (1915-1985) directed, co-wrote, and starred in Citizen Kane, widely regarded as the greatest film ever made. But Welles was such a revolutionary filmmaker that he found himself at odds with the Hollywood studio system. His work was so far ahead of its time that he never regained the wide popular following he had once enjoyed as a young actor-director on the radio. What Ever Happened to Orson Welles?: A Portrait of an Independent Career challenges the conve.

Joseph McBride is an internationally known film critic and historian who for many years has been considered one of the world's leading experts on Orson Welles. McBride's fifteen books also include acclaimed biographies of Frank Capra, Steven Spielberg, and John Ford, and two previous studies of Welles. A former critic and reporter for Daily Variety in Hollywood, McBride is an assistant professor in the Cinema Department at San Francisco State University.
Loading...
or support indie stores by buying on