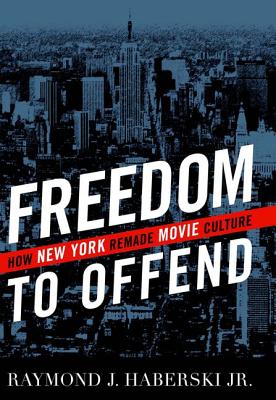 In the postwar era, the lure of controversy sold movie tickets as much as the promise of entertainment did. In Freedom to Offend, Raymond J. Haberski Jr. investigates the movie culture that emerged as official censorship declined and details how the struggle to free the screen has influenced our contemporary understanding of art and taste. These conflicts over film content were fought largely in the theaters and courts of New York City in the decades following World War II. Many of the regulators and religious leaders who sought to ensure that no questionable content invaded the public consciousness were headquartered in New York, as were the critics, exhibitors, and activists who sought to expand the options available to moviegoers. Despite Hollywood's dominance of film production, New York proved to be not only the arena for struggles over film content but also the market where the financial fates of movies were sealed. Advocates for a wider range of cinematic expression eventually prevailed against the forces of censorship, but Freedom to Offend is no simple homily on the triumph of freedom from repression. In his analysis of controversies surrounding films from The Bicycle Thief to Deep Throat, Haberski offers a cautionary tale about the responsible use of the twin privileges of free choice and free expression. In the libertine 1970s, arguments in favor of the public's right to see challenging and artistic films were twisted to provide intellectual cover for movies created solely to lure viewers with outrageous or titillating material. Social critics who stood against this emerging trend were lumped in with the earlier crusaders for censorship, though their criticism was usually rational rather than moralistic in nature. Freedom to Offend calls attention to what was lost as well as what was gained when movie culture freed itself from the restrictions of the early postwar years. Haberski exposes the unquestioning defense of the doctrine of free expression as a form of absolutism that mirrors the censorial impulse found among the postwar era's restrictive moral guardians. Beginning in New York and spreading across America throughout the twentieth century, the battles between these opposing worldviews set the stage for debates on the social effects of the work of artists and filmmakers.

Raymond J. Haberski Jr., assistant professor of history at Marian College, is the author of It's Only a Movie! Films and Critics in American Culture.
Loading...
or
Not Currently Available for Direct Purchase