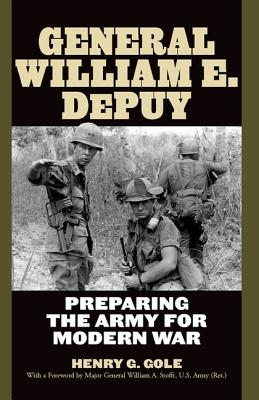 From the late 1960s to the late 1970s, the United States Army was a demoralized institution in a country in the midst of a social revolution. The war in Vietnam had gone badly and public attitudes about it shifted from indifference, to acceptance, to protest. Army Chief of Staff General Creighton Abrams directed a major reorganization of the Army and appointed William E. DePuy (1919-1992) commander of the newly established Training and Doctrine Command (TRADOC), in 1973. DePuy already had a dist.

Henry G. Gole has taught at West Point, the U.S. Army College, the University of Maryland, and Dickinson College. He is the author of The Road to Rainbow: Army Planning for Global War, 1934--1940 and Soldiering: Observations from Korea, Vietnam, and Safe Places. In addition, he served as a rifleman in Korea and completed two tours as a Special Forces Officer during the Vietnam War.
Loading...
or support indie stores by buying on