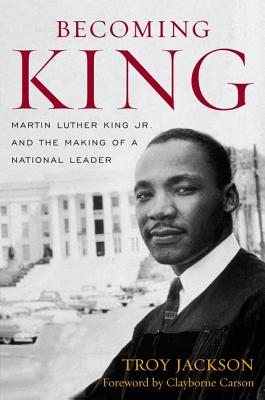 Martin Luther King Jr. and the Making of a National Leader (Civil Rights and the Struggle for Black Equality in the Twen)

"The history books may write it Reverend King was born in Atlanta, and then came to Montgomery, but we feel that he was born in Montgomery in the struggle here, and now he is moving to Atlanta for bigger responsibilities." -- Member of Dexter Avenue Baptist Church, November 1959 Preacher -- this simple term describes the twenty-five-year-old Ph.D. in theology who arrived in Montgomery, Alabama, to become the pastor of Dexter Avenue Baptist Church in 1954. His name was Martin Luther King Jr., but where did this young minister come from? What did he believe, and what role would he play in the growing activism of the civil rights movement of the 1950s? In Becoming King: Martin Luther King Jr. and the Making of a National Leader, author Troy Jackson chronicles King's emergence and effectiveness as a civil rights leader by examining his relationship with the people of Montgomery, Alabama. Using the sharp lens of Montgomery's struggle for racial equality to investigate King's burgeoning leadership, Jackson explores King's ability to connect with the educated and the unlettered, professionals and the working class. In particular, Jackson highlights King's alliances with Jo Ann Robinson, a young English professor at Alabama State University; E. D. Nixon, a middle-aged Pullman porter and head of the local NAACP chapter; and Virginia Durr, a courageous white woman who bailed Rosa Parks out of jail after Parks refused to give up her bus seat to a white person. Jackson offers nuanced portrayals of King's relationships with these and other civil rights leaders in the community to illustrate King's development within the community. Drawing on countless interviews and archival sources, Jackson compares King's sermons and religious writings before, during, and after the Montgomery bus boycott. Jackson demonstrates how King's voice and message evolved during his time in Montgomery, reflecting the shared struggles, challenges, experiences, and hopes of the people with whom he worked. Many studies of the civil rights movement end analyses of Montgomery's struggle with the conclusion of the bus boycott and the establishment of the Southern Christian Leadership Conference. Jackson surveys King's uneasy post-boycott relations with E. D. Nixon and Rosa Parks, shedding new light on Parks's plight in Montgomery after the boycott and revealing the internal discord that threatened the movement's hard-won momentum. The controversies within the Montgomery Improvement Association compelled King to position himself as a national figure who could rise above the quarrels within the movement and focus on attaining its greater goals. Though the Montgomery struggle thrust King into the national spotlight, the local impact on the lives of blacks from all socioeconomic classes was minimal at the time. As the citizens of Montgomery awaited permanent change, King left the city, taking the lessons he learned there onto the national stage. In the crucible of Montgomery, Martin Luther King Jr. was transformed from an inexperienced Baptist preacher into a civil rights leader of profound national importance.

Troy Jackson is an editor of The Papers of Martin Luther King Jr., Volume VI: Advocate of the Social Gospel, September 1948--March 1963. After receiving his Ph.D. at the University of Kentucky, he became Senior Pastor at University Christian Church in Cincinnati, Ohio.
Loading...
or support indie stores by buying on