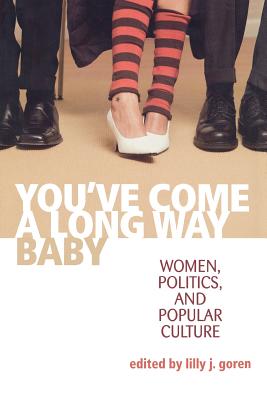 The landmark 2008 presidential and vice presidential campaigns of Hillary Clinton and Sarah Palin brought the role of women in American leadership into sharper focus than ever before. These women and others such as Nancy Pelosi and Katie Couric who are successful in traditionally male-dominated fields, demonstrate how women's roles have changed in the last thirty years. In the past, the nightly news was anchored by male journalists, presidential cabinets were composed solely of male advisors, and a female presidential candidate was an idea for the distant future, but the efforts of dedicated reformers have changed the social landscape. The empowerment of women is not limited to the political sphere, but is also echoed by the portrayal of women in film, television, magazines, and literature. You've Come a Long Way, Baby: Women, Politics, and Popular Culture investigates the role of popular culture in women's lives. Framed by discussions of contemporary feminism, the volume examines gender in relation to sexuality, the workplace, consumerism, fashion, politics, and the beauty industry. In analyzing societal depictions of women, editor Lilly J. Goren and an impressive list of contributors illustrate how media reflects and shapes the feminine sense of power, identity, and the daily challenges of the twenty-first century. Along with a discussion of women in politics, various contributors examine a range of gender-related issues from modern motherhood and its implications for female independence to the roles of women and feminism in pop music. In addition, Natalie Fuehrer Taylor outlines the evolution of women's magazines from Ladies' Home Journal to Cosmopolitan. The impact of television and literature on body image issues is also explored by Linda Beail, who draws on trendy chick lit phenomena such as Gossip Girl and Sex and the City, and Emily Askew, who analyzes the effects of image transformation in programs such as The Swan and Extreme Makeover. As comprehensive as it is accessible, You've Come a Long Way, Baby is a practical guide to understanding modern gender roles. In tracing the different ways in which femininity is constructed and viewed, the book demonstrates how women have reclaimed traditionally domestic activities that include knitting, gardening, and cooking, as well as feminine symbols such as Barbie dolls, high heels, and lipstick. Though the demand for and pursuit of gender equality opened many doors, the contributors reveal that fictional women's roles are often at odds with the daily experiences of most women. By employing an open approach rather than adhering to a single, narrow theory, You've Come a Long Way, Baby appeals not only to scholars and students of gender studies but to anyone interested in confronting the struggles and celebrating the achievements of women in modern society.

Lilly J. Goren is associate professor of politics and global studies at Carroll University in Waukesha, Wisconsin.
Loading...
or support indie stores by buying on