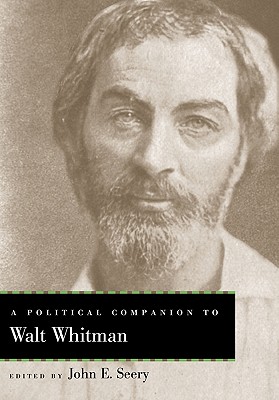 The works of Walt Whitman have been described as masculine, feminine, postcolonial, homoerotic, urban, organic, unique, and democratic, yet arguments about the extent to which Whitman could or should be considered a political poet have yet to be fully confronted. Some scholars disregard Whitman's understanding of democracy, insisting on separating his personal works from his political works.

A Political Companion to Walt Whitman is the first full-length exploration of Whitman's works through the lens of political theory. Editor John E. Seery and a collection of prominent theorists and philosophers uncover the political awareness of Whitman's poetry and prose, analyzing his faith in the potential of individuals, his call for a revolution in literature and political culture, and his belief in the possibility of combining heroic individualism with democratic justice. A Political Companion to Walt Whitman reaches beyond literature into political theory, revealing the ideology behind Whitman's call for the emergence of American poets of democracy.

John E. Seery is a professor of politics at Pomona College. He is the author of America Goes to College: Political Theory for the Liberal Arts; Political Theory for Mortals: Shades of Justice, Images of Death; Political Returns: Irony in Politics and Theory from Plato to the Antinuclear Movement; and coeditor of The Politics of Irony: Essays in Self-Betrayal.
Loading...
or support indie stores by buying on