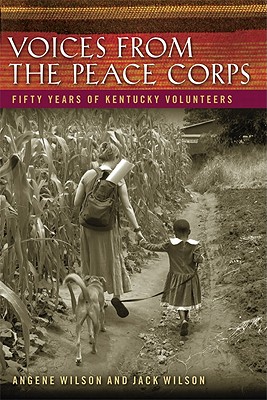 Voices from the Peace Corps

President John F. Kennedy established the Peace Corps on March 1, 1961. In the fifty years since, nearly 200,000 Americans have served in 139 countries, providing technical assistance, promoting a better understanding of American culture, and bringing the world back to the United States.

In Voices from the Peace Corps: Fifty Years of Kentucky Volunteers, Angene Wilson and Jack Wilson, who served in Liberia from 1962 to 1964, follow the experiences of Peace Corps volunteers as they make the decision to join, attend training, adjust to the job and living overseas, make friends, and eventually return home to serve in their communities. They also describe how the volunteers made a difference in their host countries and how they became citizens of the world for the rest of their lives. Among many others, the interviewees include a physics teacher who served in Nigeria in 1961, a nineteen-year-old Mexican American who worked in an agricultural program in Guatemala in the 1970s, a builder of schools and relationships who served in Gabon from 1989 to 1992, and a retired office administrator who taught business in Ukraine from 2000 to 2002. Voices from the Peace Corps emphasizes the value of practical idealism in building meaningful cultural connections that span the globe.

Angene and Jack Wilson were Peace Corps volunteers in Liberia (1962--1964) and later lived as a family in Sierra Leone (1966--1968) and Fiji (1970--1972), after Jack joined the Peace Corps staff. Angene was a professor for more than thirty years at the University of Kentucky. Jack was an administrator of environmental protection programs for the Commonwealth. They are coauthors (with Francis Musoni and Iddah Otieno) of Voices of African Immigrants in Kentucky: Migration, Identity, and Transnationality.
Loading...
or support indie stores by buying on