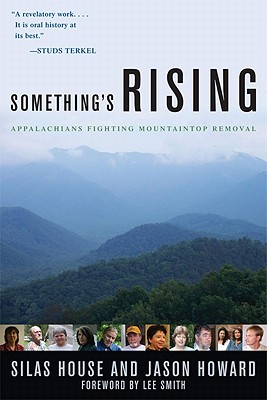 Like an old-fashioned hymn sung in rounds, Something's Rising gives a stirring voice to the lives, culture, and determination of the people fighting the destructive practice of mountaintop removal in the coalfields of central Appalachia. Each person's story, unique and unfiltered, articulates the hardship of living in these majestic mountains amid the daily desecration of the land by the coal industry because of America's insistence on cheap energy. Developed as an alternative to strip mining, m.

Silas House is a bestselling novelist of Clay's Quilt, A Parchment of Leaves, and The Coal Tattoo, whose nonfiction has been published in Newsday, Sierra, The Oxford American, No Depression, and elsewhere. In 2008 he won the Helen Lewis Award for Community Service for his efforts in the fight against mountaintop removal. He teaches at Lincoln Memorial University in Harrogate, Tennessee. Jason Howard is the editor of We All Live Downstream and has written for such publications as Equal Justice Magazine, Paste, Kentucky Living, The Louisville Review, and many others. He is a graduate of the George Washington University and lives in Eastern Kentucky, where he was born and raised.
Loading...
or support indie stores by buying on