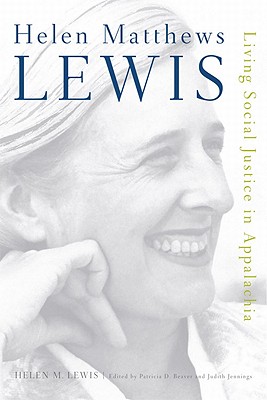 Often referred to as the leader of inspiration in Appalachian studies, Helen Matthews Lewis linked scholarship with activism and encouraged deeper analysis of the region. Lewis shaped the field of Appalachian studies by emphasizing community participation and challenging traditional perceptions of the region and its people. Helen Matthews Lewis: Living Social Justice in Appalachia, a collection of Lewis's writings and memories that document her life and work, begins in 1943 with her job on the y.

Helen Matthews Lewis has served as the director of the Berea College Appalachian Center, Appalshop's Appalachian History Film Project, and the Highlander Research and Education Center. She is coauthor of Mountain Sisters: From Convent to Community in Appalachia and Colonialism in Modern America: The Appalachian Case. She lives in Morganton, Georgia. Patricia D. Beaver, director of the Center for Appalachian Studies and professor of anthropology at Appalachian State University, is coeditor of Tales from Sacred Wind: Coming of Age in Appalachia. She lives in North Carolina. Judith Jennings, executive director of the Kentucky Foundation for Women, is the author of Gender, Religion, and Radicalism in the Long Eighteenth Century: The "Ingenious Quaker" and Her Connections. She lives in Louisville, Kentucky.
Loading...
or support indie stores by buying on